Robin Aikman, our former newsletter editor, died peacefully on 1st May after a fall at home. His funeral took place in Stevenage on Wednesday 24th May and was attended by scores of mourners, including his widow Maureen, daughters Louise and Annabel, grandsons, wider family and very many friends. Chris Honey was one of these friends and is an HHS member, and he’s sent this obituary. The family supplied the photo of the stunning coffin design. Our most sincere thanks, and condolences, to them all. 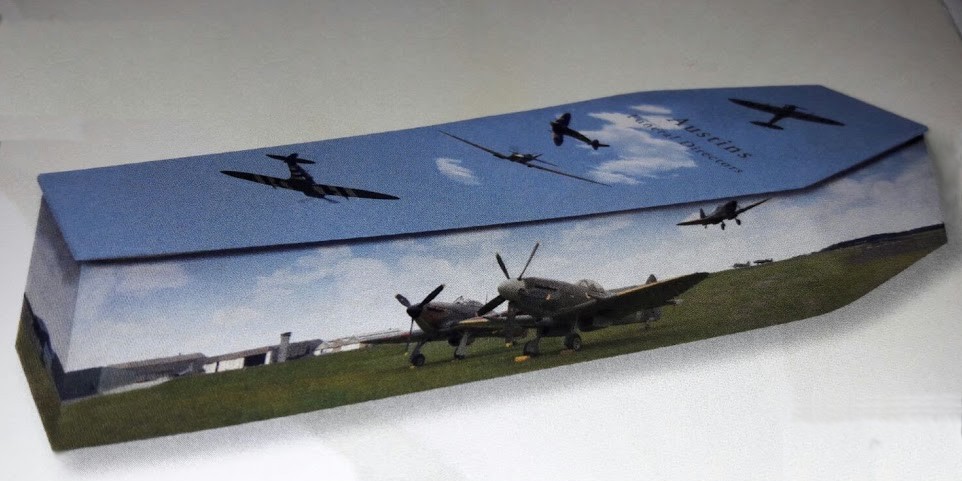 What a fascinating coffin adorned with WW2 Spitfires, what’s this all about? Well, I soon found out at his life celebration. Robin gained a degree in Aeronautical Engineering and then became a flying officer in the RAF, followed by work on the Fairy Delta 2 as an aerodynamicist. That was only part of his versatile and creative life, his enquiring mind was always curious about the world about him and how things worked. He was passionate about the British countryside, walking, cars like his 1932 Lagonda, the cryptic crossword, history, Scotland, bagpipe music, his family and wine.

As early as 1960 he was involved in computing, becoming a Managing Director then running his own IT consultancy for 20 years. He was, with Maureen, the owner and manager of an English vineyard in Norfolk, also for 20 years, and an English wine shop in London.

In retirement Robin’s interests encompassed calligraphy, genealogy, old watches and cars. He flew airplanes at Panshanger and became a member of the Hitchin Historical Society. Well what a life, and I only came to know him as the editor of the Newsletter!