Extracted from a talk entitled “It’s Your Round” by Mark Andrew Pardoe to the Society on 22nd November 2012 about every pub he has managed to find out about in Hitchin.

Mark Andrew Pardoe was the last British Rail archivist and is an expert in various subjects, including Hitchin’s pubs. It would take more space than we have here to describe every pub, as he mentioned about a hundred in his illustrated talk, but here are the ones we managed to jot down during Mark’s dash through the town’s victualling venues!

Back to Queen Street: 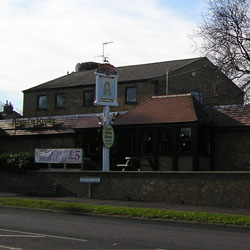 The Angels’ Reply, later The Angels

Our thanks to Mark for his whirlwind tour of Hitchin’s pubs and their fascinating social history. Many members wondered how the townsfolk of yore ever got any work done, but of course beer was weaker then and water undrinkable – and things did get done.