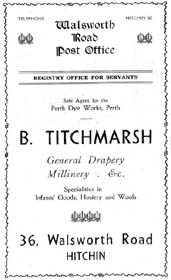 B Titchmarsh, an advertisement for the Walsworth Road Post Office

Val Taplin, leading light of the Triangle History Group, has asked Hitchin Historical Society members for their help (for those not acquainted with the Triangle, it is the area bounded by Nightingale Road, Walsworth Road and Verulam Road).

Val says,”I am appealing for information about Bessie Titchmarsh and two shops along Walsworth Road. Perhaps you have someone in your family who lived in the area. If so, there may be family photographs sitting in a shoe box or a loft, showing Bessie or her shops. 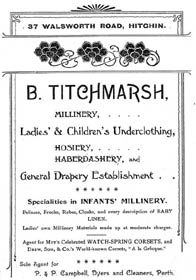 An advertisement for B. Titchmarsh, Millinery, Hosiery, Haberdashery and General Drapery Establishment

“I know Bessie came to Hitchin with her mother from Barrington in Cambridgeshire in the late 1870s or early 1880s. Bessie opened a ladies’ and childrens’ underclothing, hosiery and haberdashery shop at 37 Walsworth Road in the early 1880s. By 1895 she also had a shop at 37 Bucklersbury in the town centre. Was this also a clothing shop?

“In 1910 she moved from 37 to 36 Walsworth Road. She still ran the clothes shop, but now she became the post mistress of the Post Office at that address.

“I don’t know the circumstances of her death but Bessie passed away in January 1932 aged 70.”

Some directories list the Post Office at 41 Walsworth Road but that may be due to renumbering by the Royal Mail.

If you think you can help Val with information about Betty Titchmarsh, her shops or the Post Office(s), please contact her on 01462 454552 or email the editor.

Local concerns about the the need for improvements in council services to Hitchin will be the subject of a meeting at North Herts District Council this week. On Tuesday 11th September our chairman David Howlett on behalf of Hitchin Historical Society, together with representatives from community groups The Hitchin Society, Hitchin Forum and Keep Hitchin Special, will be meeting the whole Council Cabinet and senior officials to discuss the issues.

The groups initiated the meeting in April in a letter to the Chief Executive in which they highlighted our concerns. We are keen to impress on the Council that Hitchin is unique and its people should be participating in the Council’s decisions regarding Hitchin.

A group spokesman said, “This is a unique opportunity as it is the first time all these community groups have pulled together and approached the council about such fundamental Hitchin issues. It’s a very positive approach and we’re optimistic about working together with the council to improve things in Hitchin.”

The council stated that the Town Hall was not to be ‘disposed of’ but would be offered under a long lease to a third party operator who would take over the management arrangements and maintain the property. There had been indirect consultation through a district-wide survey and dialogue with the local community.

HHS submitted the following statement to be circulated to all committee members and read out at the meeting:

The Hitchin Historical Society is not just interested in our town’s past history: it is also concerned that awareness of this history informs decision making for the present.We are, therefore, extremely concerned about the future management arrangements now being made for the Town Hall.

In 1900 the New Town Hall was created through local philanthropy and civic effort as a resource for the people of Hitchin. It is still a key local venue for which there is no altenative. Our Society has utilised it for periodic large scale events such as historic film evenings and fund raising efforts. It is still a key element in civic functions such as in the hosting of twin town visits.

Increasingly North Hertfordshire District Council seems to have no regard for Hitchin’s collective and civic identity of which the New Town Hall is a potent symbol. This Council perspective must change as Hitchin’s distinctive needs within the District require proper recognition. A clear policy to ensure that the Town Hall remains properly available to Hitchin’s inhabitants for community use would go some way towards addressing our view that the Council is routinely failing in its duties towards our town.

Hertfordshire’s aviation history is the subject of a talk by Julian Evan-Hart at David’s Bookshop in Letchworth on 11th July at 7.30pm. He’ll also be signing copies of his new book, War-torn Skies – Hertfordshire.

Hertfordshire’s aviation history started when the Italian Vincenzo Lunardi landed here in his balloon 222 years ago so there’s plenty to talk about. Julian told us this week his book is the result of thirty years’ research and includes lists of the most heavily bombed zones in east Hertfordshire and more than 160 air crashes in the county between 1912 and 1945. It also contains photographs of the Junkers 88 that bombed de-Havillands at Hatfield which, he says, “was consequently shot down and crashed nearby.”

The book has previously unpublished photographs of wreckage and some crew members from the two B17s which collided over Weston. Julian has recorded “eye-witness accounts, even interviews with Luftwaffe crew members shot down over here”. He’s also gathered many anecdotes, and artefacts recovered from crash sites.

Julian Evan-Hart is a leading British expert in metal detecting and comes from Hertfordshire. You can reserve a free place at the talk by phoning David’s Bookshop on Letchworth on 01462 684631 or emailing them at . It promises to be an interesting evening.

Help required on the history of Hitchin Band

Heather Milsom is collecting information on the history of Hitchin Band, our local brass band. It’s existed for at least 137 years but much of its history is unknown.

Heather says “The earliest records we have are a newspaper cutting in November 1870 saying that the band took part in a procession for Guy Fawkes, and photographs going back to around 1900. We know the band lost one player during the First World War, a W Claydon, and after the war a new conductor took over, J W Shrive.”

Heather’s discovered that between 1927 and 1934 the band president was R Delmé Radcliffe JP, but says, “We then have a large gap in our knowledge until 1981. Any information that could help us research the band history before 1981 would be appreciated.”

Can you help? If so, contact Heather by email.

Peter Guthrie of Hitchin Youth Centre appeared in a half-hour programme on Anglia television at 6 pm on 20 May. The programme showed old film of the Youth Centre in the 1950s and contained interviews with Peter and three other ex-club members. There was also film of the Queen Mother’s visit to the (now demolished) Caldecott Centre in 1969.

The Hitchin Society, Hitchin Historical Society, Hitchin Forum,The Triangle Residents’ Association and Keep Hitchin Special
have sent a joint letter to John Campbell, Chief Executive of North Hertfordshire District Council, expressing “in the strongest possible terms [their] concerns about the approach of North Hertfordshire District Council towards Hitchin”. The text of the letter is available as an Adobe Acrobat document below. 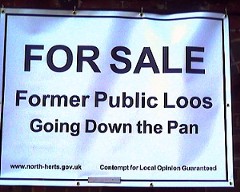 One of the signs, protesting against the proposed closure of public toilets at Portmill Lane

Late on Sunday 1 April, a series of malicious signs appeared at various locations around the town, purporting to emanate from North Hertfordshire District Council, but in fact anonymous and critical
of the council by misrepresenting its policies. They were featured on local television news on Tuesday 2 April, by which time most had been removed. The actual perpetrator(s), hiding behind a mask of
anonymity, remain unknown.

As part of the celebrations for its thirtieth anniversary, Hitchin Historical Society launched its first ever presence on the web at its Annual General Meeting on 22 March 2007. Members will be able to
contribute via the message board and will be able to submit content for the site, including pictures and text.

Back to the top