The big news this month is North Herts District Council’s sudden proposal at the end of January to close Letchworth Museum on 31 March this year. They also propose to close Hitchin Museum eventually and to open a new North Herts District Museum at a refurbished Hitchin Town Hall. This new museum will combine the two old museums, and NHDC proposes to build a new collection centre, in Letchworth, to store artefacts not on display.

There was no public consultation on this proposal and local bodies only knew of the NHDC Cabinet meeting to ‘discuss’ it a week before it took place. Even the museum curators knew of the proposal only a week or so in advance, and had only just appointed two new members of staff who were being ‘shared’ by the two museums.

HHS chairman David Howlett sent a letter expressing our society’s strong reservations about the project, and several members attended the Cabinet meeting, but the Cabinet chose not to mention our letter of objection or even acknowledge its existence. Three other groups made impassioned and eloquent verbal pleas of objection at the meeting, and a letter of objection from the Arts Council of N. Herts was read out, but again NHDC chose not to discuss or further mention these objections. In fact, the only reference made to any comments was to an offer of support from Letchworth’s Heritage Foundation.

The Cabinet’s final decision was to close Letchworth Museum in two years’ time instead of six weeks’ (a pre-arranged ‘sop’ to anticipated objectors, perhaps?) and to go ahead with the district-wide museum. NHDC said the reason for closing Letchworth museum was to save £50,000; but as the cost of renovating Hitchin Town Hall and creating the new museum is estimated in their report to be around £5 million it’s hard to understand the logic (using the split between ‘capital’ and ‘revenue’ to muddy the waters is enough to confuse most of us). It’s not clear why we should take it on trust that a new Hitchin museum and store will materialise when, in all the years of discussions about our museum, NHDC achieved absolutely nothing.

The chairman of the Cabinet said he could not think ‘individual towns’ but had to think ‘North Herts’. (Personally I’d suggest North Herts would benefit far more if he and his council celebrated the differences between Hitchin, Letchworth, Baldock and Royston, with their quite distinct characters and histories, rather than attempt to amalgamate them into one homogenous whole.)

You may wonder why the closure of Letchworth Museum should concern the Hitchin Historical Society. If Letchworth Museum closes it will lose its Accredited Status and thus compromise NHDC’s ability to apply to the Heritage Lottery Fund for any funding for this area. This would seriously affect Hitchin.

Also, given that years of prevarication by NHDC have resulted in lack of funding, lack of space and no proper facilities at Hitchin Museum, it seems inadvisable to suddenly start trusting them to make wise and irreversible (not to mention undemocratic) decisions without consultation and close local scrutiny.

I would point you to the minutes of the meeting on 27th January, but NHDC have seen fit not to put them online.

Below is the text of the letter HHS sent to the Cabinet meeting. Below that is the text of a letter we sent to NHDC on a separate subject: a planning application to demolish the former Woolpack/Orchard and Anvil public house.

On a lighter note, photos at the bottom of the page show the new plaque for the troughs in the Market Place, and members enjoying the festive refreshments and chat during our Christmas meeting in December. It’s a relief to have some happy news to end on!

I am writing concerning the key decisions on museum policy that, we understand, are to be taken by Cabinet on 27th January.

Our Society is naturally focused on Hitchin Museum given the critical role that it plays as a civic focus, learning centre and research resource for our town. We are, nevertheless, alarmed and dismayed by the possible closure of Letchworth Museum and have some broader points to make:

We are extremely concerned that, if closure goes ahead, it will impact on Hitchin Museum eg on the shared curatorial post and technical services.

Any closure represents a deeply unfortunate and negative precedent.

The possible closure of Letchworth Museum has been described by a senior councillor as being “brought forward” and by a council spokesman as “linked to improvements”. This implies that strategic policy decisions have already been made. Such decisions must necessarily impact on Hitchin Museum and yet, despite our regular attendance at the council’s periodic museum consultation meetings, we have no clear idea of what these important decisions might be. As a Society with almost 400 members keenly interested in museum policy and the council’s provision for Hitchin interests we would be grateful if our views could actually be taken into account.

The uncertainty and lack of clarity in museum policy is, to say the least, regrettable. It is doubly unfortunate that it must also impact on the morale and motivation of museum staff whose hard work has consistently earned high satisfaction scores for their service in the periodic surveys of council activities.

Please refer to Planning Application No. 08/02894/1 concerning the proposed demolition of the former Woolpack/Orchard and Anvil public house and its replacement with a block of flats. Our Society wishes to object to this Application:

The present building, erected about 1840, served from the outset as a public house, It is one of the earliest surviving Victorian buildings in the east of the town and has an interesting additional history as home, in its yard, to Hitchin’s last working small scale forge. The core Victorian building, though modest, is in keeping with the surrounding buildings and deserves re-use as part of any development scheme. Apart from destroying a perfectly serviceable building of intrinsic historical interest, the proposed new development is also too high and dominant for the site in a way which, we understand, contravenes current planning policy and would adversely affect the street scene.

The present building serves as a “gateway” feature to a triangular area of mid to late nineteenth century development between Starlings Bridge and the railway station/Highbury which still has a basic architectural and historical unity and character. Our Society is adamant that this distinctive local character should be preserved. We argued successfully in April 2003, based on a similar logic, for the retention of the 1834 gas works buildings on the nearby Starlings Bridge site as part of its redevelopment as flats. Such argumentation reinforces the need to retain and re-use the Victorian Woolpack in any new scheme.

Following the controversial decision to demolish Rose Cottage, a similarly aged building on Walsworth Road, we supported calls for an urgent review of Hitchin’s conservation area policy to address the areas of Victorian building that are currently threatened by piecemeal destruction through ad hoc and short term redevelopment. The Council has eventually agreed that such a study should be made although substantive work has yet to start. There should certainly be no grant of permission to demolish the Woolpack until that important conservation policy exercise has been concluded. 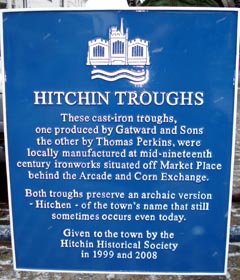 You occasionally see puzzled passers-by gazing at the two blue-painted cast iron troughs that stand close to the Cabby’s Shelter in the Market Place. Are these sturdy receptacles just ancient planters for pansies? How did they come to be there? Who were Gatward or Perkins? Why ‘HITCHEN’ with an ‘E’?

These mysteries have been resolved thanks to a new plaque affixed to an adjacent post. The unveiling took place on 10th January, a snowy Saturday, when our Chairman, David Howlett, and other committee members braved the cold weather; not forgetting our resident ‘Mr Fixit’, David Jones, who carried out the work. Make sure you check it out next time you cross the Market place. 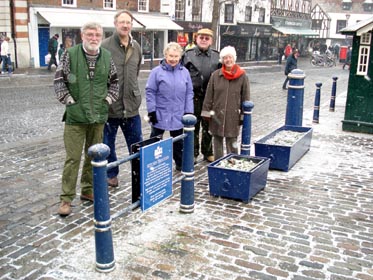 Thanks to Stephen Bradford-Best for all the photos. 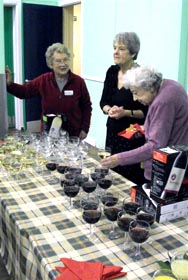 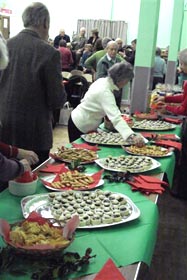 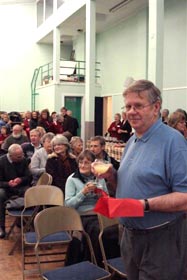 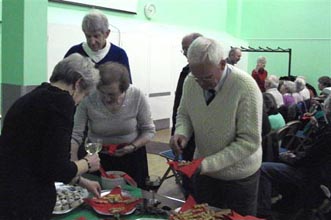 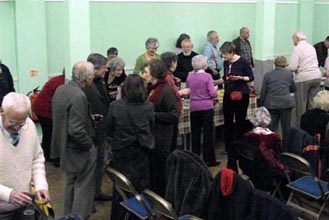 Our next meeting takes place on Thursday 26th February at Church House, Churchyard, Hitchin at 8pm, where Susan Flood, Hertfordshire County Archivist, will be telling us about the Delme Radcliffe papers for which Herts Archives are trying to raise money to save them for the county now they have come up for sale.