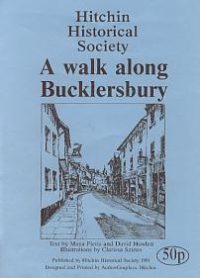 Originally an open market place in the late 13th century, Bucklersbury evolved into the street of permanent houses, shops and inns we see today. The authors take you on a stroll past 15th century timber-framed houses hidden behind brick facades, 16th century inns, a 19th century wheelwright’s shop and many other buildings, each described in detail.

Includes plan of the street with traders’ directory.