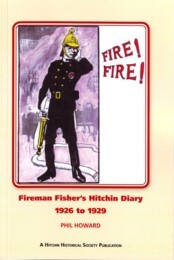 In March 2013, a friend presented Phil Howard with an informal diary of Hitchin Fire Brigade covering the years 1926-1929. Through many hours’ research it was discovered the diary was written by Frank Fisher. He was the Hitchin Fire Brigade engineer responsible for the steam fire engine in use at the time. With the personal entries by Frank Fisher, press cuttings and photos, this book gives a flavour of the enthusiasm of the Hitchin firemen at the time, dedicated to serving the town of Hitchin and surrounding area. As such, it will become essential reading for both those interested in local history and enthusiasts of the fire service alike.

Phil Howard left school in 1965 and worked for five years on the railway. In 1970 he left to become a fireman in North Hertfordshire. He retired in 2004 after a career lasting thirty-four years, the last fifteen of which were served at Hitchin Fire Station. He now lives in Shefford with his wife Chris.