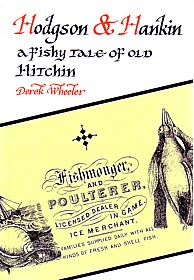 Everyone loves a detective story. The clues for this story were deposited outside the front door of Hitchin Museum on two Fridays in September 1999. These papers, which were the commercial and domestic ephemera of a firm of 19th century Hitchin fishmongers, were found impaled on office spikes inside two cardboard boxes. Thomas Hodgson and Ernest Hankin were popular tradesmen who had a shop in Bucklersbury and later in Sun Street. This book traces their lives as revealed by their invoices and as the period newspapers saw them. Never before has a local history concerned itself so much with the lives of ordinary folks in Hitchin.

Derek Wheeler was born in Hitchin, with roots well-nourished in the Chiltern Hills. His Victorian ancestors worked for the Delmé-Radcliffe and Lucas families in Hertfordshire and the Rothschilds in Buckinghamshire. He attended Hitchin Grammar School and later trained as a teacher. He was one of the last teachers to be appointed at the old Queen Street Schoold, or British School as we now know it, and spent most of his career teaching craft at Norton School, Letchworth. His wife Barbara was also a local teacher and they have two children, Helen and Tim, who are both graduates. Derek’s hobbies include being the Editor of Hitchin Historical Society’s Journal and owning and exhibiting an 1876 Shand Mason steam fire engine. He is currently employed by North Herts District Council as Museum Technician.