The Origins of Girton College in Hitchin 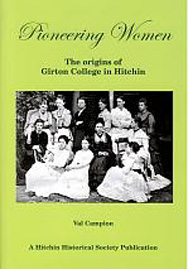 Although Girton college is now situated in Cambridge, it started life as a women’s college based at Benslow House, Hitchin in 1869.

For three years, pioneering, industrious and determined young women left their families to study at Benslow on the same terms as the male students at Cambridge, and it was only after they proved themselves equal to the rigours of study that the Cambridge dons relented and allowed them to join their lectures.

Emily Davies founded the college with the support of Elizabeth Garrett, and several students went on to achieve great things. Val Campion has used original sources to uncover and record the events of these founding years at Benslow House and the lives of the women who studied there.

Val Campion is a Hitchin resident, former teacher and was the Society’s Membership Secretary for several years. In 2004 the Society published her transcription of the notebooks of local naturalist Joseph Ransom.