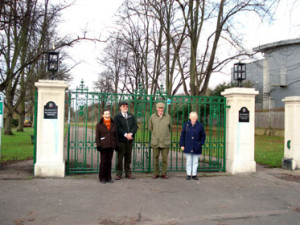 The first phase of the refurbishment of the recreation ground’s main entrance in Nightingale Road took place on 20th November.

Work on this valuable green open space has been encouraged and supported by the Triangle Resident’s Association and Triangle History Group, and organised and funded by North Herts District Council. So far the gates have been restored, the pillars jet-washed, and replica lanterns and name plaques installed. The next phase, which will include the (slightly overdue?) fitting of railings to replace those removed during the last war, may receive funding through “Awards For All”.

Michael Ransom, whose family donated the pasture land to the people of Hitchin in 1929, was present on the day, as were Stephen Sears of North Hertfordshire District Council’s Park, Grounds and Countryside department, Sue Dye and Wendy Bowker of the Triangle Resident’s Association, and Val Taplin of the Triangle History Group.

Hitchin Historical Society is assisting the Triangle History Group in producing a history of the area, to be published next year. Stephen Bradford-Best, our programme secretary, was also present and I am grateful to him for his report and photograph of the event. 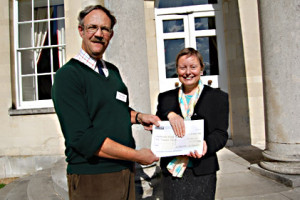 The Radcliffe family owned Hitchin Priory from 1548 to 1965. Their archive, which contains material crucial to the history of Hitchin and beyond, has been loaned to Hertfordshire Archives and Local Studies (HALS) in Hertford since 1949. These papers are now up for sale, and an appeal to raise the money to buy the papers was offically launched by the Hertfordshire Heritage Fund at Hitchin Priory on 8th October.

The Hitchin Historical Society has pledged £5000 to the fund, and a presentation was made to County Archivist Sue Flood (pictured) at the appeal launch. Leaflets about the appeal are available at Society meetings.