Behind the Headlines: the Hertfordshire Express

Terry Knight, one of our founder members, gave a timely talk to the Society on 28th May on the history of the Hertfordshire Express and its successors. It was 150 years ago, 1859, in the same year as Darwin’s On the Origin of Species was published, that this newspaper became the first in Hertfordshire to go to press weekly. Then titled the Hitchin and Royston Express, it was a broadsheet in the usual style of the day, with advertisements covering the front page. Terry worked on the Express for 26 years until 1989 and had many amusing stories to tell of absent editors, primitive conditions and practical jokes, but I’ll stick to his outline history for this report.

In 1859 the newspaper had premises in Bucklersbury and the Market Place which doubled as a Post Office and general store selling such things as cricket gear. In October of its first year the newspaper sold 2,200 copies but by the mid 1860s, with a second newspaper, the Bedfordshire Express, running this had risen to over 13,000 a month: it had become the largest and most important newspaper in Hertfordshire.

The newspaper went through several changes of ownership until in 1871 William Carling, organist and choirmaster at St Mary’s Church, bought it. It moved premises to Exchange Yard in 1882, a new building blazoned with Carling’s name and the name of the newspaper across the front, with an emblem of a hart replicating the hart that appeared on the front of the newspaper.

William Carling was succeeded by his three sons and in 1916 the newspaper became a limited company with a new editor, Ernest ‘Hoddy’ Hodson, and a new junior reporter, Reg Cannon. Hoddy stayed for 38 years and Cannon for 25, after which he went to work at the Comet.

Conditions in the office were very basic, with one telephone, one typewriter and a gas-powered printing machine which made the whole building shake. Despite these limitations they managed to produce a sheet every day during the General Strike in 1926. As late as the 1940s there was still just the one typewriter. A temporary member of staff after WW2 was Charles Dickens’ granddaughter Monica, who went on to use the characters in the office (rather to their alarm) in her book My Turn to Make the Tea.

With Stevenage, Letchworth and Hitchin growing rapidly in the 1950s the newspaper modernised to appeal to this new audience, and two editions were published: the Hitchin Express and the Stevenage Express, which in fact had the same content but in a different order. When the Gazette title was introduced in 1971 the Express name faded away. The newspaper weathered the change from linotype to photo print in the 1970s, strikes in 1978-9, a move to new premises at 16-17 Market Place and the change from broadsheet to tabloid. It was then sold for £2.3 million. It has since changed hands again, and the Hitchin office has closed as the newspaper now operates from Stevenage.

Terry’s book, Behind the Headlines (author Terence F Knight) was published in 1987. 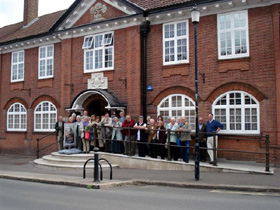 A group of our members joined the first coach excursion that we have arranged for some years when we travelled to the far west of the county, to the small town of Bushey, on Thursday 7th May. Firstly we visited the museum, housed in the large, redundant council building, where we were greeted by Hugh Lewis, Chairman of Bushey Museum Trust. He took us to the former Council Chamber, now an art gallery, and whilst we enjoyed coffee and biscuits he gave us a brief history of the founding of the museum. 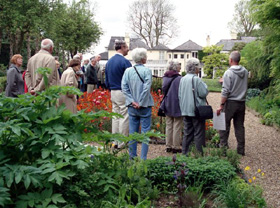 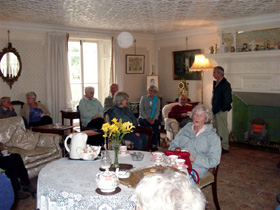 We had a private tour of what is probably our most impressive local stately home, Hatfield House, on 14th May 2009. 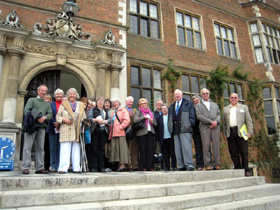 The present Jacobean house was built in 1611 by Robert Cecil, First Earl of Salisbury and Chief Minister to King James I, and has been the home of the Cecil family ever since. It is currently the home of the 7th Marquess of Salisbury who had made some changes, noticed by several members, particularly the unusual hanging of paintings on walls covered with tapestries. 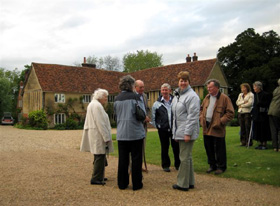 We have now finished our meetings until the autumn. Our next meeting is on Thursday 24th September when Tim Dye, the owner of High Down, will be talking to us about the history and renovation of this important and little-altered 17th century house. The meeting starts, as usual, at 8pm at Church House and is followed by refreshments.