The Society held its 32nd AGM on Thursday 26th March; seventy-five members attended. The formal business occupied the first portion of the evening during which the Annual Reports, which had been circulated previously, were discussed and approved. The members elected David Howlett as Chairman, Geraldine Couchman as Secretary and John Skeeles as Treasurer.

Had it all been a bit much for retiring treasurer Phil Rowe?

Geraldine takes over from Simon Walker and John from Phil Rowe, and warm thanks were extended to Simon and Phil for their many years of excellent work for the Society, very often far beyond the call of duty. Simon is now officially taking over as Journal Editor, and Phil is taking a breather […..or so he thinks. Ed].

David Howlett then spoke in appreciation of the Society’s President, Mrs Anne Ashley Cooper, who died in February and whose support and enthusiasm will be greatly missed. The Committee recommended that, as a mark of respect at this AGM, the Society did not fill the post of President immediately, and the members agreed.

The last formality was the annual presentation of the Reginald Hine Award for Hitchin Local History. This year it was awarded to member Val Campion for her book Pioneering Women, about the 19th century origins and first students of the Ladies’ College at Benslow House, Hitchin. Four years later it moved to Cambridge and became Girton College.

John Lucas told us about his work on transcribing the diary and recollections of Phebe Glaisyer, née Lucas, who was born in 1816 at the Brewery House in Sun Street. She was one of Reginald Hine’s Hitchin Worthies. The Society is delighted to be publishing John’s book on 31st October this year.

Audrey Stewart had an update for us on the Triangle History Project, on which the Society is working with Val Taplin and other local residents. They are recording the story of this distinctive area of the town, and the results will be published by the Society in Autumn 2010.

Andrew Fell-Gordon then gave us a surprising account of his work on Hitchin’s very own Nobel Prize winner, Lord Hugh Cecil. He was the town’s MP after 1911, was heavily involved in Hitchin’s politics and made a groundbreaking contribution to international relations and the League of Nations.

Lastly, Bronwyn Tarrier talked entertainingly about what she’s achieved by overlaying old maps of Hitchin on the up-to-the-minute online maps and aerial photos of Google Earth. This has given her insight into changes to the town and how it’s developed over the last 200 or so years. A fascinating project, and one which she encouraged us all to get involved with if we can as she’s hoping to set up a workshop, perhaps at the library, so we can get together and investigate the possibilities further.

To close the evening David Howlett gave an update on the District Council’s long-gestating changes to the Museum Service. The latest news is that Hitchin Town Hall is being assessed as a possible location for a new District Museum. It was difficult for the Society to offer views on the proposals as there was little detail on the planned changes, how they might compare with other options and what all this will mean for those interested in Hitchin’s history. Further and more detailed discussions are expected soon. 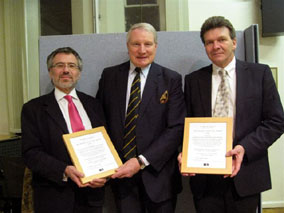 Presentation of the award 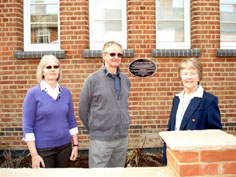 Members of the Gainsford family

Gainsford Court started life in 1868 as St Saviour’s School as part of a complex of church, almshouses, orphanage and educational facilities instigated by the Reverend George Gainsford. In 1956 the school became the Gainsford Memorial Hall and then, in 1977, the Sikh Temple Sri Guru Singh Sabha Gurdwara. In 2006 the Temple moved and the building was sold for redevelopment.

Fortunately a combination of Conack Homes and David Kann devised a scheme to save and restore this important Victorian building and it now provides a group of attractive and individual flats. 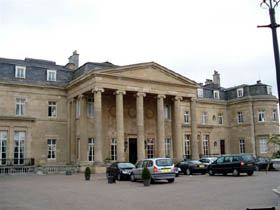 The house we see today was built by Robert Adam for the 3rd Earl of Bute, Prime Minister to King George III. He employed ‘Capability’ Brown to landscape the park, including creating a man-made lake by damming the River Lea. In the next century, a later generation commissioned Sir Robert Smirke, architect of the British Museum, to remodel the west front. 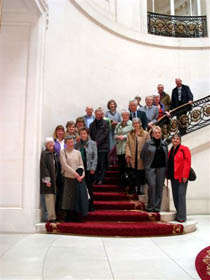 Members ready for the tour

In the last century the house became the home of the wealthy diamond merchant Sir Julius Wernher who made further improvements to the house, notably to the State Dining Room and oval staircase. After him the house was lived in by his son Sir Harold Wernher, and his wife Lady Zia who was related to the Russian Royal Family. Their most famous visitors during their ownership were our present Queen and her new husband who spent part of their honeymoon in the house.

Following the death of Lady Zia in 1977 the house and estate were inherited by Sir Harold’s grandson, Nicky Phillips, but sadly he died when the house was struggling financially. In 1997 the house was purchased by Elite Hotels and, after a major £60 million refurbishment, it was opened as a luxury hotel in 2007. The new owners commissioned copies of the art collection and tapestries to decorate the grand rooms. 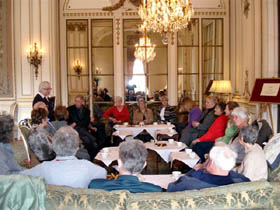 Our guide was Zena Dickinson who has worked in the house for almost a quarter of a century. She had a wealth of information to tell us about the house, including the period in the late 90s when it became a major location for films such as Four Weddings and a Funeral with Hugh Grant, Eyes Wide Shut with Nicole Kidman and Tom Cruise, and several James Bond films. Zena really brought the place to life for us. We concluded our visit with coffee and home-made biscuits in the old ballroom. A memorable visit.

Several events are planned this year to raise money to save this fine archive for the county, and two local walks are scheduled for May. One concentrates on Hitchin’s Historic Centre and the Radcliffes and will take place on Sunday 3rd May from 2-3.30pm with our own Bridget and David Howlett as guides. It covers a mile and a half, will cost £5 and has a maximum number of 20 participants, with the option of teas afterwards at the British Schools Museum until 5pm.

The other is on Sunday 24th May from 2-4pm and concerns Hitchin Priory’s Outer Park, with Bridget and David as guides again. This one covers 3 miles, will cost £5, and has a maximum of 20 people, with optional teas as before.

At our next meeting, to be held on Thursday 23rd April, we will hear new information about the origins of St Mary’s Church in Hitchin from Dr Joseph Elders, Archaeology Officer for the Church of England. Please note that, for this one occasion, the talk will take place inside the church at 8.00 p.m. and not in Church House.