Our two big summer events are brewing nicely, and there’s a rather special book to recommend. Here’s the latest update.

11th July, a date for your diary. Plans for the Society’s first History Day, part of Hitchin Festival, are progressing apace. In addition to the eleven groups mentioned here last month, we now know the Museum Service of North Herts District Council will be there too. 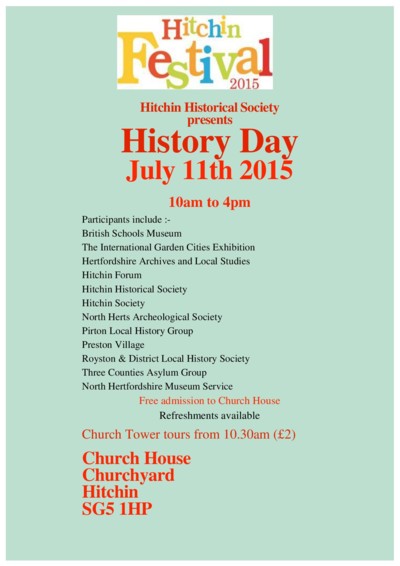 We hope you will be able to come along on Saturday 11th July to help make this occasion a special one! It’s free, refreshments will be available, and just about everyone who knows anything about Hitchin’s history is likely to be there. What an opportunity! 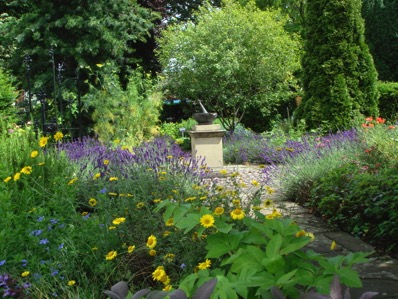 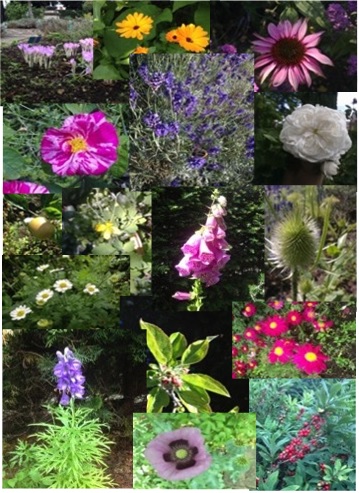 As you probably know, the Society is publishing another book this July and this time it’s about the curious William Ransom Physic Garden which lies next to the old museum. The whole book has been written by Physic Garden volunteers. David McNamee is one of them, and has sent us this:

A physic garden was typically used to teach apothecaries (the forerunners of present-day pharmacists) about medicinal herbs. Hitchin and its surroundings have a long history of producing drugs from plants. Edward Perks, a chemist and druggist in the High Street, was growing lavender by 1823, followed by William Ransom cultivating and producing drugs from plants (including from deadly nightshade and hemlock) from 1846 onwards. The Ransom company also imported plant materials to manufacture drugs. 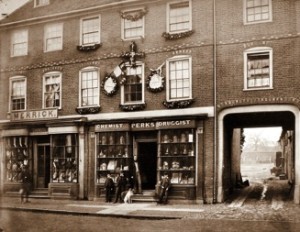 The genesis of Hitchin’s physic garden came when Miss Vi Lewis, the last pharmacist at Perks & Llewellyn (as the chemist shop had become), donated her shop fittings and pharmacy collection to the Hertfordshire Medical and Pharmaceutical Museum Trust, which was formed to find a home for the collection and to found a Physic Garden. Thus the William Ransom Physic Garden became a reality, opening on May 20th 1990, and Hitchin Museum displayed the shop in a dedicated room.The garden contains just under 100 species of plant, some well known such as primrose, rue, and hyssop, and others less common species such as fleabane, lungwort, and black snakeroot. The centrepiece of the garden is a bronze pestle-and-mortar sundial on a stone pedestal. The gates, railings and two benches in the garden were made by Henry Isaac, iron founder in St Ippolyts.

The guidebook is written by Physic Garden volunteers to celebrate the 25 years since the garden opened. It describes the history of the garden, with chapters about William Ransom & Son and Perks & Llewellyn. The plants in the Garden are described, with details of their uses and other interesting facts.”

The Grand Launch is on Saturday 18th July from 10am to 2pm in the library grounds at Paynes Park, Hitchin. Authors will be there signing books, and the Physic Garden will be open and volunteers available to give special guided tours. The book will be on sale at the launch, price £12.95. After the event you will be able to buy a copy from the Society, from E.T. Moore’s bookshop in Hitchin and David’s Bookshop in Letchworth.

Thanks go to David McNamee for use of their photos. 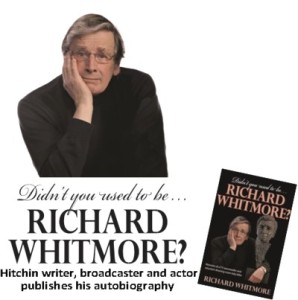 Although to us in Hitchin Historical Society Richard Whitmore is, first and foremost, our highly-valued film archivist, to the rest of the country he is the newsreader with one of the best-known faces on television during the 1970s and ’80s. Richard surprised many people when he gave up his BBC job to fulfil a long-held ambition to become a professional actor.

In an honest and occasionally self-deprecating autobiography celebrating his 80th birthday, he recalls his years as a young blade in Hitchin, where he worked as a reporter on the Hertfordshire Express and ‘trod the boards’ with The Bancroft Players amateur dramatic society, later heading their successful campaign to build the town’s Queen Mother Theatre.

It was while working as a freelance journalist in the 1960s that Richard found himself a niche in broadcasting, first on radio and then with BBC Television, where he was appointed a staff reporter. After ten years on the road covering major news stories of the day, he became one of the regular anchor men on what was then the BBC’s Nine O’clock News. Richard writes with honesty about the perks and problems of becoming ‘a famous face’ and how a sudden fear of flying affected his career. He also explains why, in his mid-fifties, disenchantment with news reading led him to give up the security of his BBC staff job to try earning a living in the unpredictable world of theatre.

Richard and his wife Wendy were married in 1957; they have four daughters and nine grandchildren and still live in the market town where they were both born.
Didn’t you used to be … Richard Whitmore? will be on sale at Eric T Moore Books, 24 Bridge Street, Hitchin, and at the Hitchin Town Centre Initiative shop in Churchyard from Saturday 27th June.