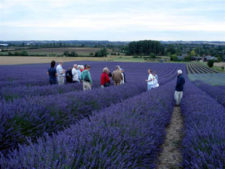 The Perks and Llewellyn chemist shop in the old museum is to be moved (in part) to the new museum, but the logistics of removing the counter and drug shelves have still to be worked out.

Fittings which will not be used at the new museum look likely to be moved to Hitchin Lavender as an added attraction for their visitors. This seems like an altruistic move on the part of the Hunter family as the display is unlikely to increase visitor numbers and may well slow down the movement of people through the attraction.

They can also house the fittings in a dry barn until the facility is up and running, which means the shop can be moved from its present location to enable the old museum building’s next incarnation. It is good to know the fittings won’t be hidden away in the future, and we are very grateful to the Hunter family and Hitchin Lavender.