The second volume of articles from the Journals of the Hitchin Historical Society is ‘Hitchin: More Glimpses of the Past’. This is again the work of a pandemic-induced hermit, Simon Walker, who has selected and edited items from publications between 1987 and 2006. It was not intended to have a specific theme, but several articles do describe Hitchin life between 1910 and 1950. This is due to several authors who lived through that time and used their early memories to describe different aspects of town life. 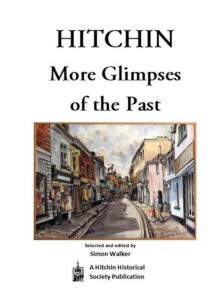 The trail moves from a who’s who of shopkeepers and business owners in 1916 to a reminiscence of being a soldier in the 1st World War. Between the two wars a railway clerk describes his daily life and the comings and goings at the station. Marshall Dellar records his daily memories of school, the shops and a single cinema, and later working at F W Cooper’s butcher’s shop (and slaughter house) in Tilehouse Street. That is a reminder of how local the provision and supply of food could be, and also gives reference to the attractive tiled panels that can still be seen in the street. After war time service, with a brief description of his de-mob, he worked at the post office and records his life and experiences in that job.

Another account of daily life is recorded by Derek Fosdyke after his arrival in town in 1944 – the houses they lived in and the schools he attended. Austerity was not a political choice to balance the books, it was a just the way things were. An “up market” move to a new home was welcome, albeit with only a cold water tap in the kitchen, but it had a flushing loo, in the next door’s garden. Bath tubs in the kitchen and no electricity was just how it was for some.

There is much more, including the story of The Dell, malting and brewing and a ditty naming the Victorian pubs in town, the British Schools and even the White Witch of Walsworth, no less.

From Monday 1 November, it may be bought from Hitchin Information, North Herts Museum and Waterstones (Hitchin).

Copies can be ordered directly from