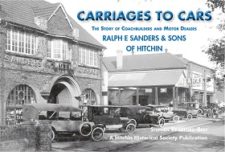 The story of coachbuilders and motor dealers Ralph E. Sanders and Sons of Hitchin. The Sanders’ family business flourished in Hitchin for over eighty years. These skilled builders of the Victorian horse-drawn carriage adapted their craft to serve changing times, and the building of bespoke motor bodies made way for the sale and maintenance of the mass-produced cars of the later twentieth century – from carriages to cars.

Stephen Bradford-Best is Hitchin born and bred, and has lived in the town for most of his life. After more than forty years in the civil service, starting in Hitchin Crown Court in Bancroft, he has now retired and can spend more time following his interests. These include not only local history but also all forms of transport, particularly vintage cars, and over the last twenty-five years he has driven his 1936 Austin Nippy sports car over 50,000 miles across Europe, including to the Swiss Alps and Sicily.