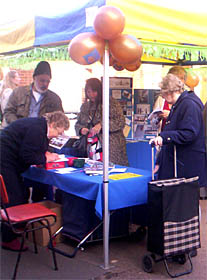 Our book about one of Hitchin’s most loved and distinctive features was launched in a party atmosphere on 3rd November 2007. Hitchin Arcade Then and Now was the culmination of two and a half years’ work by eleven authors and was timed to celebrate 80 years since Hitchin’s Arcade opened in 1927.

“It was a proud moment for both Hitchin Historical Society, who published the book, and Hitchin Arcade where the book was launched”, said Scilla Douglas, our then publications manager. “And in a fortunate coincidence, 2007 is the 80th birthday of the Arcade as a shopping arcade, so we were very pleased that we were able to complete the book just in time.”

The Arcade was in particularly festive mood on the day courtesy of the Town Centre Manager, with hundreds of balloons decorating the shops and a barrel organ providing a vintage touch.

Scilla said, “The book brought together many different interests and then lots more townspeople pulled together to make the day such a success. It was a celebration that did Hitchin proud!” At the launch David Howlett, our chairman, singled out for particular mention Shilcocks, A Touch of Garnish and The Ginger Jar, who together provided refreshments for the launch ceremony.

Sales of the book were brisk and nearly 200 were sold in just a few hours. Hitchin Arcade Then and Now was available from the Society and at various local outlets, but is now out of print. It was priced at £9.95.