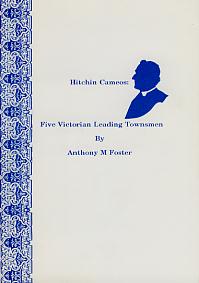 Having played so pivotal a role in the formation of Hitchin Historical Society in 1977, and having been active in the production of its early publications, Anthony Foster’s early death in 1981 was a great loss. This description of the parts played by five Hitchin nineteenth century “worthies” is as much a memorial to the author as it is to the subjects of his pen.

In this short book we learn about John Reynolds, Deputy Chief Constable of Hertfordshire; George (father) and George Bernard (son) Gainsford, Vicars of St Saviour’s; Thomas Perkins, engineer and philanthropist; and George Beaver, civil engineer and surveyor. This well-illustrated treatise is a must-have for anyone interested in the town and the characters that helped form its personality in the nineteenth century.