An occasional review of local history 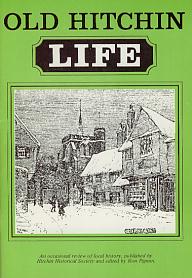 Between 1979 and 1988 five editions of “an occasional review of local history” were produced by Hitchin Historical Society under the title “Old Hitchin Life”. They covered such diverse subjects as Harkness Nursery, Schooldays in Walsworth, William Ransom and Son, and Hitchin bodysnatchers. Original copies of these sought-after publications are hard to come by.

Old Hitchin Life number 1, from December 1979, has been reprinted in its original form, complete with contemporary advertisements, making it a doubly-historical publication. It includes articles on the Hitchin Western Railway, Hitchin’s first cycle speedway team and Harkness Nursery. If this reprint is a success it is hoped subsequent editions will, in their turn, also be reproduced.

This book is currently out of print