Memories of Life in Regency Hitchin

Transcribed and annotated by John Lucas 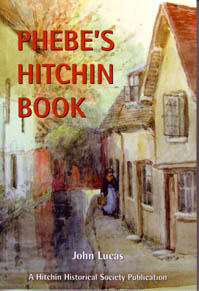 Phebe Lucas was born in 1816 at the Brewery House in Sun Street, Hitchin. As a member of the Quaker brewing family of Lucas, she grew up at the heart of a close and influential circle. Later, as Phebe Glaisyer, she wrote this vivid account of her early years for her children, who knew it as her ‘Hitchin Book’. It is a rare and charming account of family life in early 19th century Hitchin, essential reading for those interested in Hitchin’s past or in Regency life in general.

John Lucas has transcribed and annotated her diary, with additional chapters to give some background to her writing.

John Lucas is Phebe’s great, great, great nephew who worked mainly for government mapping agencies until his retirement. He was born in the New Forest but has lived in Wales for the last 20 years with his wife and their family. As well as being a keen genealogist John enjoys photography, and hill-walking in Wales and North Yorkshire.