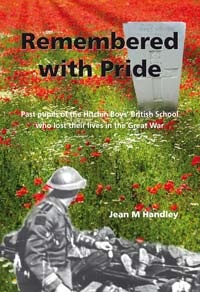 This copiously-illustrated book tells the stories of the sixty-eight young men, all pupils of Hitchin British Schools, who died during the Great War. Its maps, illustrative material – much in colour – and general background information, which Jean uncovered during her meticulous research, provide a snapshot of Hitchin at that time as well as the war itself. A timely publication in this centenary year of the start of the Great War. Jean is a volunteer at the British Schools Museum.