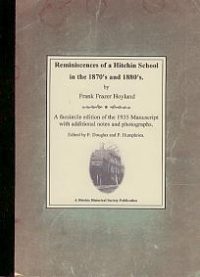 The Woodlands School, based in a large house in Bancroft, existed between 1873 and 1889. It was established by Joseph Paxton Drewett and Cranston Woodhead as a boarding school mainly for the sons of Quaker families, and seems to have provided a most liberal and humane education.

As one of the first five boys to arrive when the school was opened, Mr Hoyland was in the ideal position to write a history of the school. He wrote to many former pupils, and their memories combine with his own to give us a vivid description of the school during its sixteen-year existence. Pupils who attended the school included children from the Fry and Cadbury families, and the artist Frederick Landseer Griggs. One of the teachers was Walter. S. Rowntree.

When the school eventually closed because of financial pressures, about half its pupils and all its fixtures and furnishings moved to the new Hitchin Grammar School.

Frank Frazer Hoyland was one of the original Woodland School pupils. An early resident of Letchworth, he was a keen bird-watcher and his collection of birds’ eggs was donated to Letchworth Museum. His other hobby was locomotives, of which he made some fine paintings. He died in 1933 aged 83.