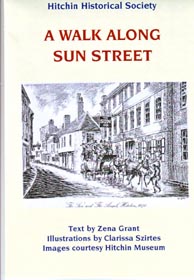 Part of Hitchin’s open-air market until the late 14th century, this street was first known as Angel Street after the medieval Angel Vaults Inn, and only later became known as Sun Street.

By then it had permanent houses, shops and inns, and the author takes you on a walk through time, past 15th century timber-framed houses behind Georgian facades, ancient breweries, an 18th century printing office and, of course, that busy former coaching-inn, the Sun Hotel itself. Many buildings are described in detail with brief histories, and many are illustrated with exquisite line drawings.

Zena Grant has been a member of the society for many years, and is a historical researcher and writer who lives in Letchworth. She is a past editor of the website.