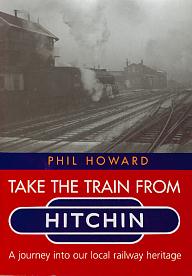 Phil Howard’s passion for railways began in early childhood when his mother let him watch the trains on their way home from nursery school in Letchworth, and his father introduced him to the joys of trainspotting. What more natural when he left school in 1965 than a job on the railway at Hitchin? He rose to the position of ‘secondman’ on diesels before leaving in 1970 to fulfil his other boyhood dream, that of a firefighter, a career from which he retired in 2004.

This book is the product of more than fifty years’ fascination with the local rail scene, and has given Phil the opportunity not only to delve into his own wealth of memories and those of his friends and fellow enthusiasts, but also to undertake considerable research into the fascinating history and background of Hitchin’s rich railway heritage.

Hitchin is rightly noted as a classic medieval market town. But, from the mid-nineteenth century, it became also a key railway centre, served by both the Great Northern and Midland companies. Phil Howard’s fascinating book explores, with a personal perspective, the impact of Hitchin’s railways on the town, its immediate neighbourhood and on our railway history more generally. As such it has become essential reading for both local historians and railway enthusiasts.