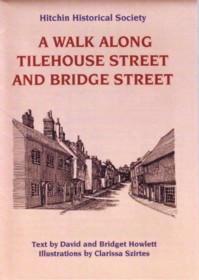 Perhaps the most fascinating and attractive of all Hitchin’s streets, Tilehouse Street has a 600 year history and varied character. The authors take you on a walk past 16th century houses, inns and shops, pointing out botched medieval alterations and ancient wool stores, crown post roofs, medieval timber-framing and gothic tracery. This leaflet contains a map and illustrations.

David Howlett is a long-standing member, and now Chairman, of the society. Bridget Howlett is a historian by background and an archivist by profession. She is also an active and long-standing member of the society and has contributed to several books on the history of the town in addition to editing ‘A Survey of the Royal Manor of Hitchin 1676’ for the Hertfordshire Record Society.