A visitor from distant shores: Ian Gill and Walsworth House 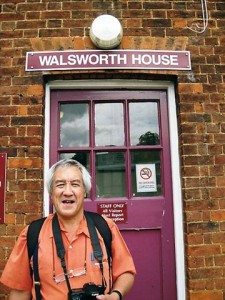 A man with historical links to Hitchin made a long journey to visit the town last month. Ian Gill, a British resident of Muntinlupa City in the Philippines and a consultant with the Asian Development Bank, travelled here in pursuit of some family history.

Ian’s paternal grandmother, Constance Giffen, came to Hitchin in about 1911 and worked as cook for Colonel and Mrs Anderson at Walsworth House. Ian is trying to piece together more about Constance’s time here, and his father’s early childhood. 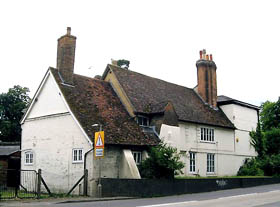 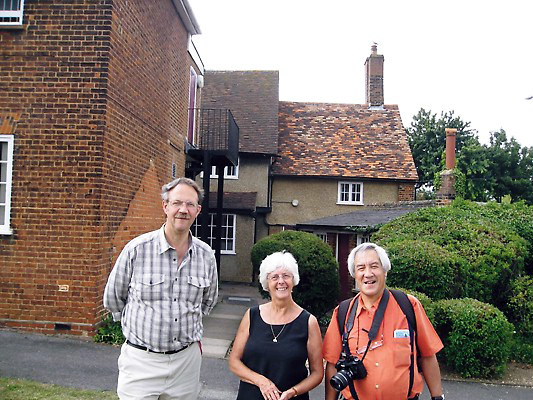 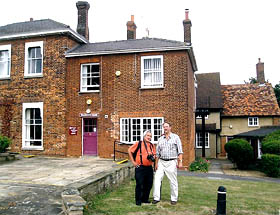 David and Ian outside Walsworth House

After contacting our former secretary Simon Walker, who provided information and photographs of Walsworth House, Ian arranged to meet Scilla Douglas and our chairman David Howlett in Cambridge Road for a tour of the house and surviving grounds. We thank Janet Baker-Pigram of North Hertfordshire College for her kind help in arranging this at very short notice, as the house is now a college administration centre. 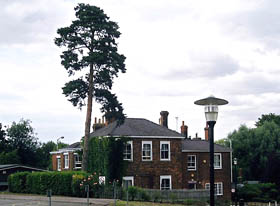 Walsworth House, a Listed Building, includes sixteenth century or earlier timber framing and an imposing early to mid-nineteenth century extension with surviving portions of grounds and outbuildings. It is very much one of the “hidden gems” of Hitchin’s history. Ian was particularly interested to see the oldest part of the building, a kitchen and pantry, which seem to have been in use until relatively recent times. It’s possible his grandmother worked away in these very rooms.

Ian intends to conduct more documentary research on his family, such as looking at the recently-released 1911 census, and has promised to let us know if he unravels more of his Hitchin story. If you can add anything at all to the history of Constance Giffen and her time with the Andersons, do please let us know – Ian will be delighted.

Thanks to Scilla for the photos.

Archaeological work in Hitchin this summer

An archaeological survey and perhaps some excavation of St Mary’s Church will take place on 25th and 26th August, for which HHS has agreed to donate up to £500. We understand our money will be put towards carbon dating.

Other archaeological work was carried out on 25th -26th July at The Biggin, Hitchin’s second oldest building, founded in 1361 as the Gilbertine Priory of Newbiggin by Edward de Kendale. 17th century graffiti was discovered on ancient wood panelling, with one later name clearly visible: Sam Beldam 1746. No further news on him or the survey yet.

A group of members visited the beautiful fields of Hitchin Lavender at Cadwell Farm, on the outskirts of Hitchin, in the evening of Friday 31st July (postponed from 17th July because of torrential rain). We are so fortunate that the Hunter family resurrected this important local industry a few years ago. It has since grown to become one of the most important lavender farms in the country. 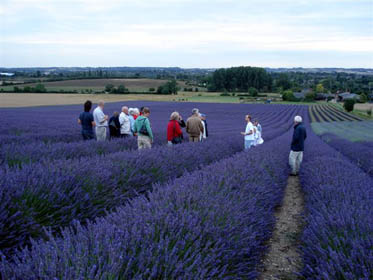 The lavender fields at Cadwell Farm 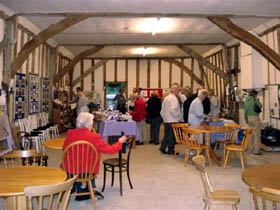 Coffee in the barn

Our guide for the evening was Nick Hunter, who explained in detail about the method of growing and harvesting lavender and the different types they grow, including the pale blue Ashdown Forest and mauve flowered Lullingstone Castle. The largest area is planted with the strongly scented Grosso, a French hybrid. We also heard about the distilling process and the use of the oil extracted. From the summit of the lavender fields we surveyed the extensive rows of plants in full bloom stretching out below us, and noted various landmarks, like the Girl’s School and St Mary’s Church.

We later enjoyed coffee (and some had delicious home-made cake) in the old barn where we could also purchase lavender plants, bunches of lavender or the various lavender products, including lavender scented soaps and other toiletries. Everyone enjoyed a fascinating evening.

We mounted several events this year, all very successful and well-attended. There were three walks: David Howlett’s two ‘Railway Walks’ and Bridget Howlett’s ‘Priory Walk’; and a talk on ‘The Story of Lavender’ at Cadwell Farm.

The biggest draws were two presentations of Old Hitchin On Film at the Queen Mother Theatre, for which 306 tickets were sold. After deducting all expenses, our net surplus exceeded £1,200, which we shared equally with Hitchin Film Club.

Well done to David, Bridget and the Film Archive team, and a big thank you to everyone who attended or supported our events and made them such a success. I hope everyone attending had a very enjoyable time.

We have now finished our meetings until the autumn. Our next meeting is on Thursday 24th September. As Tim Dye is unable to give the scheduled talk on High Down House, Bridget Howlett has bravely stepped into the breach and will be giving a talk on Unravelling the mysteries of Hitchin’s oldest map. Bridget is Senior Archivist at the London Metropolitan Archives and her talk describes her detailed and fascinating investigations into the true date of the earliest Hitchin map. Do come along and support Bridget if you can, it sounds like an piece of detective work well worth hearing! The meeting starts, as usual, at 8pm at Church House and is followed by refreshments.