The dig at St Mary’s church scheduled for 24-25th August had to be cancelled at the eleventh hour. When Gil Burleigh, freelance archaeologist, and Dr Joseph Elders, Archaeology Officer of the Church of England, arrived on site with the churchwardens on the first morning to carry out a risk assessment and start a test pit under the floorboards, they discovered more than they’d bargained for. Instead of the anticipated 1 to 2 inch layer of Victorian concrete which they could have broken out relatively easily, they found 9 inches of solid concrete.

In the time allowed and with the resources available it would not have been possible to cope with this. In any case the church authorities did not want the noise and dust that removal would have caused, and there would have been problems about reinstatement and additional costs. Reluctantly they made the decision to abort the dig, and messages were hurredly sent out to everyone who had volunteered to help.

Whatever lies beneath the church, however exciting it may be, will have to remain a mystery for the forseeable future.

There were four outings in August, to four very different houses. Three were very grand, early 19th century houses set in extensive parks; the other, dating from around 1500, was more modest in size but just as interesting, and with a musical bonus. Our Programme Secretary Stephen Bradford-Best sent these reports and photographs. 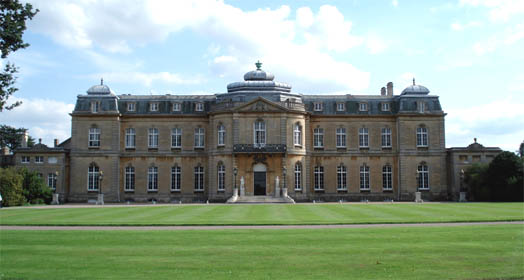 The north front of Wrest Park

On first sight we could have been in France as we arrived at a grand château, but we were actually in Bedfordshire, at Wrest Park. A group of members visited on Thursday 13th August and were privileged to be shown around part of the house not usually open to the public.

We were able to see three rooms on the first floor papered with antique wallpapers. Two had delicately hand-painted Chinese paper from the late 18th century (transferred from the old manor house), and a third, the Eldorado Room, had detailed Italian wallpaper. This dated from about 1850 and depicted scenes of the ‘four’ continents.

Our guide told us about the history of the house and of the family, many of whose portraits hung on the grand staircase, and we also visited other formal rooms on the ground floor. The house was originally built to designs by its owner, Thomas, 2nd Earl de Grey, an amateur architect and first president of the Royal Institute of British Architects. He was inspired by buildings he had seen on trips to Paris. 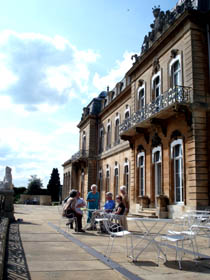 The celebrated gardens, including the Orangery and the Italian Garden, also date from this period. The gardens’ centrepiece is a French parterre divided by a wide gravel central walk which continues to a very fine, free-standing, domed pavilion in full Baroque style by Thomas Archer.

In 2006 the house was taken over by English Heritage in addition to the extensive park which has been in its care since just after WW2. For the time being many of the rooms in the house remain empty or let to commercial tenants. Perhaps, in the future, more of this impressive house will be regularly open to visitors. We enjoyed a fascinating visit on a glorious sunny day. 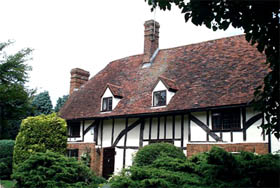 The front of Southend Farm, a wealden house

On the afternoon of the 15th August, a sunny Saturday, a group of members made their way to the centre of Stevenage Old Town and were amazed to find a beautifully restored, medieval farmhouse. In fact Southend Farm is a Grade II* listed Wealden house built around 1500. 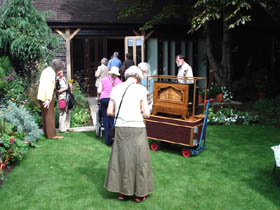 Members listen to one of our host’s mechanical organs

Our hosts, Peter Craig and Janet Tyndale, took us on a guided tour of the house and explained its history based on their extensive research. We also explored the third of an acre informal garden that surround the house. Janet was busy tending this garden in readiness for the following day, when it was to be open to the public as part of the British Red Cross Open Garden Scheme.

Finally Peter showed us his collection of mechanical organs housed in a purpose built barn. These included three vast Belgian Café Organs which entertained us in turn. Peter is a former Chairman and active member of the The Mechanical Organ Owners Society. Members sipped elderflower pressé as they sat in the barn or outside sunning themselves on the lawn, and tapped their fingers to the familiar tunes – a magical afternoon. 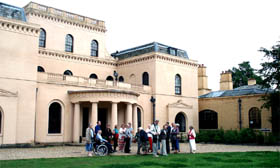 Members outside the main entrance

Our visit to Moggerhanger House on Thursday 20th August was on a bright and windy day. Whilst we toured the grounds we were told about the origins and past uses of the house, including as a sanatorium.

We heard there had been a house on the site since the 15th century which was later known as Almonds Farm. From 1777 to 1857 it was owned by the Thornton family. During 1790-1816 it was rebuilt for Godfrey Thornton, Governor of the Bank of England, by the eminent architect Sir John Soane RA (1753-1837), who had built the Bank of England and the Dulwich Picture Gallery. He also remodelled 10 & 11 Downing Street and 12 & 13 Lincoln’s Inn Fields, the latter now the ‘Sir John Soane’s Museum’. 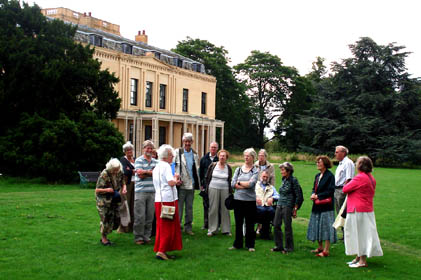 The guide describes the history of the house to attentive members

Moggerhanger House, now Grade 1 listed, was purchased by its present owners in a semi-derelict state in 1995 for £1. The multi-million pound restoration of the house, using Soane’s original drawings, continues. Inside the house we were impressed by the painstaking work so far carried out; a house that is well worth a return visit. After our tour we had cream tea in the restaurant. 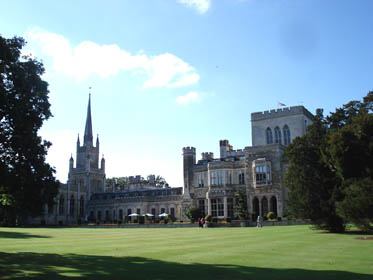 Ashridge House from the south lawns

We travelled over Dunstable Downs to reach the last of the four houses – Ashridge House – on 27th August. The earliest buildings on the site were an Augustinian Monastery founded in 1283, and the Egertons, later Dukes of Bridgwater, acquired the land and buildings in 1604. 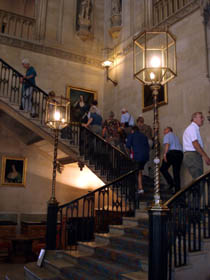 The 3rd Duke was the pioneer of our canal network; and the 7th Earl of Bridgewater commissioned James Wyatt to build the current house, completed in 1814. ‘Capability’ Brown and Humphrey Repton were involved in laying out the park. The grand neo-gothic palace was renowned for its hospitality, including to royalty, which continued from 1853 in the ownership of the Lords Brownlow. The last surviving member of the family sold the estate around 1925 and the land was acquired by the National Trust. 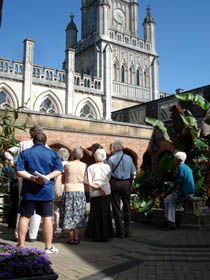 In the courtyard, our guide describes the architecture

The house has since been used for various educational purposes and is now a thriving business college. Our two knowledgeable guides filled in details about the house and the family as we toured the formal rooms, gardens and stable block. After the tour we enjoyed tea and delicious raspberry cake in the Wyatt Room.