Season’s Greetings! There are several items to report this month, and at the end are photos of the launch of Phebe’s Hitchin Book at Philpott’s in Sun Street on 31st October.

In other news, John Lucas, the author and transcriber of Phebe’s diary, has started a new project on the Lawson Thompson scrapbooks (1868-1927) at the museum; and Stephen Bradford-Best is pursuing the setting-up of a memorial to Sir Henry Wood, whose funeral took place at Hitchin Church, and the BBC Symphony Orchestra has shown an interest. More details of both projects are on the ‘projects’ page (see links on the left).

For an account of the talk at our last meeting – Professor Nigel Goose on the Straw Plait and Hat Trades – see our Meetings page. 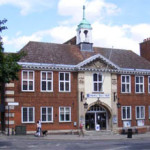 North Herts District Council held a Full Council meeting on 3rd December, which several Society members attended, to discuss the museum-and-Town Hall Scheme. The Save the Town Hall Group was allowed more time to come up with a plan to take over the Town Hall, so the decision on whether or not to commit funds to the scheme was deferred until the next Full Council meeting on 4th February 2010.

Many members will be familiar with a line of mature trees running from the station towards Benslow House. An application for preservation orders on these trees has been submitted to North Herts District Council, and the Society has sent a letter to the council’s planning department supporting this application. Predominantly beech, the trees run along the chalk ‘cliff’ from The Bungalow, along the boundary of Station Approach and the station car park, to the backs of the houses on Benslow Rise. 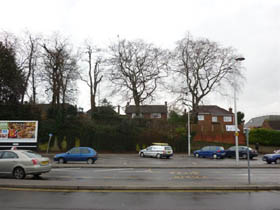 The trees rising from the station to Benslow House. Photo courtesy of Phil Rowe.

These trees line an historic route. They seem to have been planted in the early 1850s shortly after the railway works ceased, and formed an avenue from Benslow House to the Lodge (now The Bungalow) and the station. Benslow House was, from 1869 to 1873, Hitchin Ladies College, a pioneering institution of national importance in women’s further education. It was the origin of Girton College, Cambridge. One of the principal reasons Benslow House was chosen to house the college was its easy access to the railway with its links to Cambridge and London universities, so both the house and the grounds are historically important and need to be protected.

Benslow House is already on Hitchin’s Register of Important Local Buildings, but the ancient ‘avenue’ is not protected. Indeed, the tree at The Bungalow was almost lost to the saw recently and saved only at the last minute, so the preservation orders are needed urgently.
The Society also considers that The Bungalow should be included on the new Register of Important Local Buildings.

We are also strongly supporting proposals to create a Hitchin Railway and Ransom’s Recreation Ground Conservation Area, and this row of trees would form a key boundary to that area.

This year’s symposium, run by the Hertfordshire Association for Local History, took place at Hitchin’s British Schools Museum. The theme, Educating our Own, involved three of our members giving talks and many more helping as marshalls, general porters and gophers.

Member Eileen Wallace talked about attitudes to working class education before 1870; Richard Whitmore recalled his war-time experiences at Hitchin Boys’ Grammar School; and Val Campion spoke about the pioneering women who enrolled at the new College in Benslow in 1869.

What a talented and knowledgeable membership we have!

These documents, held at Hitchin museum, are being transcribed. William Dunnage was the nineteenth-century Hitchin Postmaster who claimed he had seen a statement in a fifteenth-century manuscript that a monastery was founded at Hitchin by Offa, King of Mercia, in 792. David Hodges, the curator at the museum, has supplied an electronic version and proof-reading is now in progress.

The Launch of Phebe’s Hitchin Book

As mentioned above, the launch took place on Saturday 31st October at Philpott’s, the furnisher’s, in Sun Street, an appropriate setting as this was once Brewery House where Phebe Lucas started her life. The building retains many original architectural features, and the Philpott family generously invited us to use their front showroom for the launch. They even moved furniture and arranged suitable seating for visitors, and we are very grateful for their kind and generous offer. Stephen Bradford-Best discreetly prowled among us with his camera to record the event: 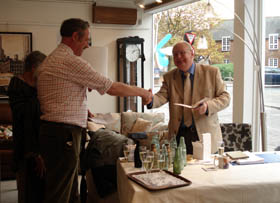 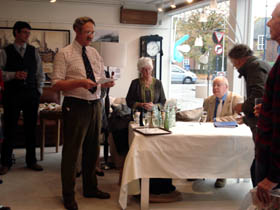 …followed by speeches with Scilla Douglas in attendance 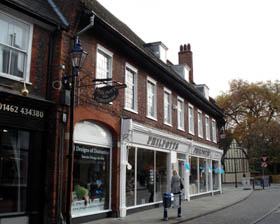 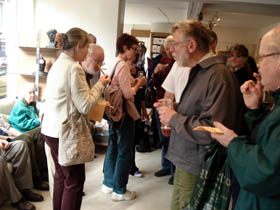 The food is tempting… 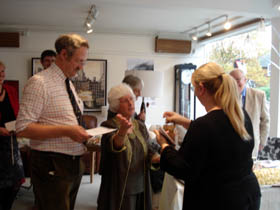 … and our caterer, Angie Burrage, is rewarded 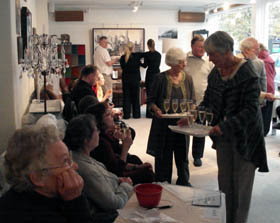 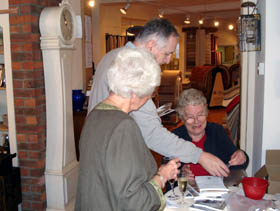 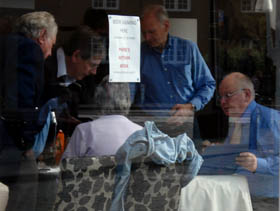 The view from outside as the author signs books. 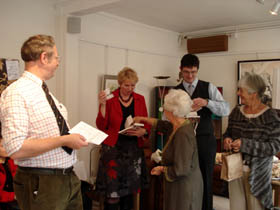 A thank-you present
for our hosts, the Philpotts 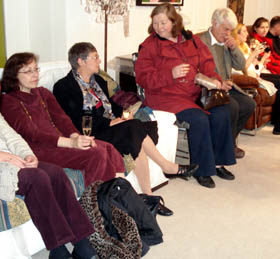 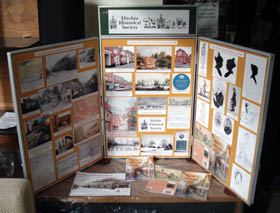 Perhaps they’re taking in the display.