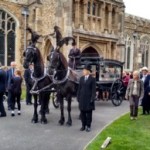 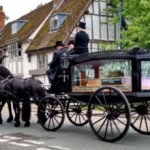 After the great sadness of learning of the death on Friday 14th August of our President, and mourning her loss, it now seems timely to celebrate Scilla’s life.

Scilla’s funeral took place on Friday 4th September at 12 noon at St Mary’s Church, Hitchin, attended by a capacity congregation and followed by a gathering at the Priory in Tilehouse Street hosted by Scilla’s family. At the funeral, David Howlett, our Programme Secretary, gave a eulogy to Scilla. This is what he said.

I am very grateful to Scilla’s family for the chance to speak.

We will all have our ‘own Scillas’: mine is a ‘Hitchin Scilla’. I must underline at the start that, in her contribution to the life of the town, Scilla really will be an impossible act to follow. This is no cliché but the truth; what follows can scarcely do her justice.

I am going to divide my remarks – FIRST I will touch the substance of Scilla’s Hitchin involvement with our local history and sense of community. SECOND I will recall briefly some personal recollections of her local role.

FIRST then the substance –

Scilla had a long and deep interest in this town. That interest was focused on Hitchin’s history and continuity and the way these both contribute to its undoubted sense of distinctive identity and community. Her reasoning was not to look back on a golden age but to study our local history to understand both where we have come from and to inform our present and influence our future.

When teaching at Hitchin Girls’ Scilla became absorbed in the history of the school and, in the late 1980s, produced two books on the theme of ‘The School on the Hill’. She also put much effort into assembling a school archive, working with the Old Girls’ Association and encouraging staff and students to be aware of their educational heritage.

Scilla soon became involved with Hitchin Historical Society. In turn she was a Committee member, Membership Secretary, our longest serving Chairman and our third President. Our Society owes her an immense, immeasurable debt.

Press coverage of Scilla’s life has highlighted her amazing contribution to local history publishing. This is a remarkable achievement by national, not just local standards. Over the past 20 years – since the ground breaking publication of Discovering Hitchin –she has worked with Pauline Humphries to nurture over 25 substantial books and many smaller pamphlets and articles. She has also helped foster some ‘new technology’ outputs: Hitchin DVDs and Richard Whitmore’s productions of Old Hitchin on Film.

Many of Hitchin’s historians would not have made it so successfully into print without her unfailing encouragement, patience, amazing organisational abilities, attention to detail and, it has to be said, without her ever–polite but unyielding pressure to keep to deadlines. I don’t think the authors would mind me saying that that are a very diverse bunch which makes Scilla’s achievement even more remarkable.

Scilla’s ‘Book Launches’ (with capital Bs and capital Ls) became works of art in themselves with speeches, presentations, guest appearances (like horse drawn vehicles, motor fire–engines) and the signing and selling of books with authors centre stage. Our last one was in July to commemorate 25 years of Hitchin’s Physic Garden. Despite being increasingly unwell Scilla was, with great courage and determination, still very much involved. At 8.30 on the morning in question a number of us arrived to start work by gathering around pages of pencil notes of instructions from the lady herself – and all passed off smoothly.

A book reviewer recently noted that ‘Hitchin has been well served by its local historians’. This is a fitting tribute to Scilla’s efforts. She has significantly furthered an important tradition begun by Seebohm, Hine and Foster – ‘Hitchin in print’.

But her Hitchin enthusiasms were much more than just publications. She was gripped by an interest in the present fabric of the town and a desire to involve as many of us as possible – not just local historians – in understanding and appreciating it. She had a real sense of what made Hitchin ‘different’.

This enthusiasm embraced a diverse range of schemes such as the painstaking documentation of the Caldicott Centre before demolition; the rescuing and restoration of the former Station Cabmen’s Shelter and its relocation to the Market Place; early involvement in Hitchin’s Heritage Open Day scheme; the moving of the Sainsbury Hitchin history mural from Brand Street to the Library; the provision of a new series of Blue Plaques of Hitchin’s history as a millennium project; the rolling out of other special interest plaques around the town such as at Frank Young Court. Her enthusiasm even involved close interest in the future of our cobbles, old brick walls, bridge parapets, granite kerbstones and various bits of what Scilla called ‘our ironwork’.

She was central to celebrations including, with Hitchin Museum, to mark the 150th anniversary of the Great Northern Railway’s arrival in the town. She was a moving spirit behind Hitchin events for the British Association of Local History’s periodic ‘Local History Weeks’. She took close interest in Hitchin’s archaeological excavations, and cultivated links with those involved – we were not surprised recently to discover, after a request for help, that she had ensured the HHS was provided with a scarce and confidential copy of a preliminary site report. She was also keen that our Society should raise the profile of local history by contributions each year to Hitchin Festival.

Although not naturally a bureaucrat she became a keen student of local government, planning procedures and conservation area management. She took a close interest in redevelopment that impinged on the town’s historic identity and secured some notable successes – such as with influencing repairs at Hitchin Station and the sympathetic conversion of the Gainsford School into Gainsford Court – where constructive new things were done with old buildings.

Scilla was outwardly not in any way a political person with a capital ‘P’ and sometimes became understandably frustrated when Hitchin’s obvious merits, interests and due treatment were frustrated by organisations with little interest in, or understanding of, the value of real local context. But she always worked to put our views across with courtesy, charm, logic, tact and energy and was an active politician with a small ‘p’ in putting a case for the town wherever possible.

In these wider issues of Hitchin’s identity Scilla was always a team player. Her network of contacts across the town was legendary – especially those connected to the mothers, daughters, even granddaughters taught by her at Hitchin Girls’ School.

Scilla energetically supported other local groups with heritage interests. She was closely interested in the efforts of Hitchin Forum, Hitchin Initiative and the Hitchin Society as they too strove for the wellbeing of the town. She was concerned that we work together and involve as many Hitchin based talents as possible including other organisations, businesses and countless individuals. She was indefatigable in using her ‘small p’ political talents to broker constructive progress and to find the right individual for the right job – even if that individual did not at first realise their enthusiasm to take on the task concerned (!). Her talents were such that she could coral what sometimes seemed like wagon loads of cats without tempers fraying, claws showing or bad blood being spilt.

A particularly fond cause of hers was The Hitchin British Schools Museum. She was there from the start, brush and dustpan in hand and became an unstinting supporter. She was prominent in all sorts of practical ways and in fundraising over many years and was especially keen on the Friends organisation. She was centrally involved in two of their books – one on the Headmasters of the Boys School and another on those pupils lost in the Great War.

Despite her seminal involvement in so many key areas of Hitchin interest it is noteworthy, however, that she was a modest person and in no way a ‘grand–stander’. It is no coincidence that, when it became necessary to don period costume – a periodic hazard for all local historians – Scilla was decked out in a maid’s garb, not that of the Lady of Downton Abbey. This underlined her commitment to the ‘hands–on’ work to be done rather than being at the front to take the credit. She was genuinely surprised when, last year, she was awarded a Hertfordshire Association for Local History Lifetime Achievement Award.

All in all Scilla’s contribution to this ‘substance of local history and sense of community’ amounts to staggering record, as Keith Hoskins has recently noted, of ‘getting things done’.

NOW, by way of conclusion, a few personal recollections –

I have worked with Scilla on Hitchin history projects for over 20 years. I therefore got to observe the maestro’s techniques at close hand and I never ceased to be amazed. In this self–indulgently electronic age I was impressed how the Douglas technique rested firmly on paper, pencil and personal contacts – though this latter did include telephones.

Not long since we visited a local businessman about possible help with one of our book launches. As usual we were aiming for a good show but at minimum cost. Negotiations proceeded in Scilla’s inimitable way. By the end we got what we wanted and more with our host generously shouldering much of the cost himself. Scilla was then interrupted by her phone and moved to the side of the room. During this interval our business host asked me ‘what actually did Scilla do for a job’ saying that he could certainly find her a slot on his client negotiation team (!).

I also got used to scouring the town with her in pursuit of the ‘nuts and bolts’ of local history. For example, we undertook much work in conjunction with some good consultants engaged by NHDC to review Hitchin’s Conservation Area. During this we penetrated normally obscure portions of the town including personal hallways, kitchens, lounges and even bedrooms of properties of particular interest. Her network of contacts continually, often literally, opened doors and I witnessed her as a ‘Carlsberg of Conservation’ – reaching parts that others did not reach – and certainly would not have been reached by the two non–descript middle–aged men with suspicious looking clipboards who accompanied her…

One of the things I will miss most is Scilla saying ‘We should aim to do THIS and, David, could you come up with the words to go with it which we can then discuss..?’. After what she considered a reasonable time there would be the phone call asking ‘Have you managed the words yet?’ to which the reply ‘I am just about to…’ was followed by ‘Yes David, I really think you should…’ My words today are the last time I will be able to fulfil this function – and there is more than a bit of me that has been expecting that phone call over the past few days of drafting this Tribute.

I was a bit cautious about my last step but I heard Scilla saying ‘David, it’ll be fine’. I want, therefore, to end this Tribute with a ‘visual aid’. Several years ago Scilla mounted, as you do, a very successful celebration of ‘Hitchin on Sea’ at the New Town Hall complete with all the trimmings including sticks of traditional rock. This rock has attention to detail, is well presented, it’s sweet, strong, slightly colourful in dress and has ‘Hitchin’ clearly stamped right through it – just like Scilla herself.