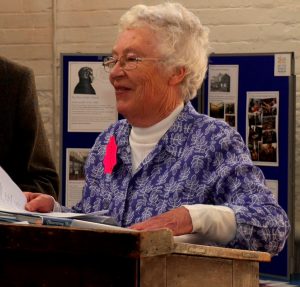 I’m here today to talk about the first book (Discovering Hitchin – the one that inspired the volume that we’re launching today) and about how they relate to each other.

Discovering Hitchin began life in the Spring of 1992 when Scilla Douglas and I planned to assemble notes for a pamphlet investigating the town’s suburbs, and their unappreciated charms. A great deal of work had already been done to celebrate our historic town centre, but little to expand the knowledge on where the majority of townspeople actually lived. Scilla had a passion for architectural ephemera, of which she had both a photographic and a physical collection.

Many will remember the garden in Wymondley Road which hosted a memorable collection of locally made bricks and ironware, plus a wonderful array of chimney pots. She had a particular interest in local domestic architecture. As a more recent arrival in Hitchin I was interested in the town’s suburban development.

What had begun as weekend and holiday forays around local streets (we both worked in Hitchin’s secondary schools) soon became a passion. Once we had exhausted “all known contacts” we became “cold callers” armed with notebooks and camera. Many an unsuspecting resident fell victim to the harmless middle aged ladies sporting Historical Society badges, and Scilla’s charm and determination resulted in many a cup of tea in local kitchens where we were given privileged access to memories and “shoe box” family photographs.

By early 1994, we realised that that the “pamphlet idea” would no longer fit the information contained in two hefty box files and over 100 plastic pockets. But there was a problem. Hitchin Historical Society was a charity without unlimited resources and would not be able to sustain the financial risk of an expensive publication containing a large number of photographs and drawings. At about the same time we had noted the appearance of high quality local history publications by Egon Press in Baldock. Taking a chance, we approached John Street who ran the company. After sitting us down with a cup of tea he looked at our material and announced that IF we could arrange a coherent and orderly text he would be interested in producing the book for us.

“No pressure then!” Although Scilla was now semi-retired from teaching, she was as busy as ever. I was still working full time. Neither of us could type. Moreover, on our suburban tours we had been negligent in filling in all the gaps, because we lacked either the time or the contacts. The Historical Society came to the rescue, with members nobly coming up with material. Contributions arrived from “Hitchin-born-and-bred” sources, which we could never have replicated. Interestingly some of these stalwarts have written their own chapters in the new book, notably Derek and Stephen.

Help on the typing-up front was provided by a kind and patient lady, the late Dorothy Hughes, wife of the then Treasurer of the Society – Laurie Hughes. En route to work at the Priory School I would drop off the semi-legible pencil text from the previous evening (“cut & paste” really meant that, sometimes “cut & staple”), only to find it immaculately typed when I called to pick it up at the end of the day.
Egon were amazingly supportive and we were placed into the care of a designer, Nick Maddren, in Baldock who was in charge of layout. Scilla and I paid many visits to see him at home, working 1990s style with sheets of card covering all table and worktop space, even on one occasion an ironing board. It was all coming together, as if by magic.

A quick count revealed over 100 names on the Acknowledgment page. Tasks like indexing – always a last minute challenge – were completed by night-owls Bridget Howlett and the late Sue Fitzpatrick, just hours before the printing deadline.

Discovering Hitchin was launched in October 1995. It was the first local book to concentrate on Hitchin’s suburban streets and proved to be a great success.

Local interest in researching the town’s story seemed to grow following the publication of Discovering Hitchin. Before long, the Society’s ‘Publication Team’ (ie. Scilla and myself) were busy with one book a year (authors to encourage, books to launch, promote and sell). Sometimes two books, once three. And of course, Scilla was often involved in other town-centred projects. Every now and then she would muse on some unused content in the two original boxfiles that had never made it into print. She dreamed of a sequel to Discovering Hitchin, she even had a title.

Once we had come to terms with the fact that we had lost our “guiding force” the Society began to search for a fitting way to pay tribute to Scilla’s contribution to local history. “The List” immediately made an appearance and the feeling grew that what she would really have wanted was the realisation of her dream of a sequel volume. But there were difficulties. Some of the original material had been used over the intervening years, and also we were no longer able to visit the Students’ Room in our local museum! Also, obviously, no Scilla.

Luckily Bridget Howlett had recently retired from the London Metropolitan Archives so, apart from cooking David two hot meals a day, she could be available for editorial duties. I was shoe-horned out of publications retirement to join her. Once the project emerged so did offers of research material from Society members who were eager to contribute their work.

So, first a theme. Discovering Hitchin focused on a stroll around the already built environment. This time we decided to explore the origins of our suburban landscape. Basically, who had owned what in the past, and how and when it became residential development. In addition, we wanted to include interesting material of a more general nature. By the end of 2016 we had firm offers of individual chapters from a wide variety of local historians, some already in print, others tentatively dipping their toes into the water for the first time.

Much had changed in the years following the publication of the first volume. We had all (well, most of us) joined the digital revolution and could call up research material at the click of a button. We lacked an open museum, but we were kindly given access to their valuable digitised material. The Society by now had established its own archive, and our members had built up their individual collections.

And for the really specialist material we had the constant advice and support of Hertfordshire Archives & Local Studies (HALS to us) at County Hall. Much time has been spent there over the past 3 years.
I think that it’s fair to note that this new volume is far better researched than the first. No more “Local Legend has it….” as Scilla and I were prone to fall back on!

Bridget and I are not members of the Historical Society’s Committee, but throughout we have been advised and supported by them. Firstly by Phil Rowe (recently seen serving your drinks) and latterly by Mike Clarke, their Publications Officer. Just as Bridget and I had no real idea that becoming the Editors would be such hard work (but of course enjoyable), I suspect that Mike was equally in the dark when he took on this role! Thank you Mike.

So, here you are Scilla! Your wished-for “follow up” volume – Discovering More About Hitchin, complete with your suggested title.

We offer this as a tribute to all the inspiration and encouragement that Scilla gave to the many aspiring Society authors, which in part prevented her from realising her own dream during her lifetime.

We are delighted that we have Scilla’s close family with us today and Bridget would like to present them with copies of the book.