The Repton School Register includes a Hitchin boy who later returned to his native town to work in the community.

In 1873, thirteen-year-old James Henry Gilbertson of 103 Walsworth Road (a detached house opposite the end of Radcliffe Road), son of Henry Gilbertson, started at Repton School in South Derbyshire. According to the school prospectus, Repton is the very finest co-educational boarding and day school, founded in 1557 on the site of an Augustinian Priory. Its alumni include a wide range of well-known figures, from Christopher Isherwood to Jeremy Clarkson, Roald Dahl to Christopher Frayling, and include three former Archbishops of Canterbury. The School Register tells us that James Gilbertson was born in 1860 and attended the school for four years (presumably as a boarder), and between 1876 and 1877 he was in the Football XI. 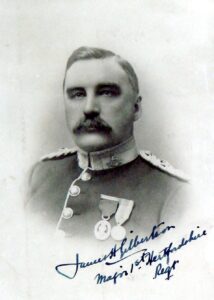 However, from the London Gazette we know that James returned to live and work in Hitchin. Around 1906 he was living at The Limes because he was a subscriber to a magazine that year where he had to give his address; and in 1912 he was elected Vice-Chairman of the newly constituted East Herts Division of the Association relating to Scientific and Clinical Medicine. He was also Worshipful Brother Dr James Henry Gilbertson, first Senior Warden of Royston Masonic Lodge, from which he rose, by 1927, to be Past Assistant Grand Sojourner in the Supreme Grand Chapter of England.

James’s address in 1930 was 103 Walsworth Road, so he had returned to the very family home he’d left when he was thirteen to go to Repton School, back in 1873.