From the Hertfordshire Express Saturday 23rd May 1863.

THE FORISTERS – a lodge has been formed at the Trooper, and now numbers about 30 members. On Wedesday afternoon they paraded the streets headed by the temperance drum and fife band, after which the greater portion adjourned to a field in which the Tee-totalers were holding a demonstration. The evening was spent most harmoniously. Several applications have been received for admission into the lodge. 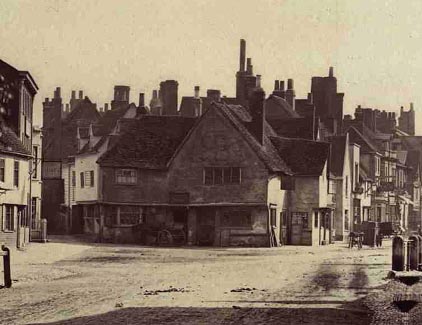 The Old Trooper from Alan Fleck’s CD-ROM ‘Exploring Hitchin’, available from the Society

WHIT-WEDNESDAY FAIR is now nearly extinct, and the friends of the temperance cause have for several years past appointed that day for a demonstration. On Wednesday last, there was a much larger attendance than usual. Tea was provided in a spacious tent, which was erected in a field, kindly lent by Mr. Alfred Ransom for the occasion, at half-past four, and the field was thrown open to the public at six. During the evening the large audience were entertained by addresses by Mr. George Howlett, the Rev. D. Burns, Mr. John Noble and other advocates of the cause. The Band of Hope drum and fife band played during the evening.