Stephen told us that the Perkins family had farmed at Hillmorton, near Rugby, since Medieval times. To give some context, we can add that during the 18th century they ventured into making agricultural machinery, and Thomas Perkins (1735 – 1805) had one of the largest wholesale ironmonger businesses in the Midlands, based in Coventry. A descendent of the same name came to Hitchin in 1849. 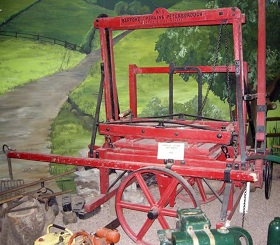 This Thomas Perkins was born on 22nd November 1827 and married Frances Sharman of Melton Mowbray, born on 10th August 1822. They had four children and lived at Paynes Park in Hitchin. Like his forbears, Thomas became an agricultural engineer, making agricultural equipment at Hitchin Ironworks and Ironmonger’s on the Market Square in Hitchin, near the Corn Exchange. As “Thomas Perkins of Hitchin, Agricultural Implement Maker” he took out various patents, as advertised in the London Gazette. For instance, on 27th May 1870, for “improvements in apparatus for ploughing or cultivating land”; in March 1872 for the invention of “improvements in implements for cultivating land and for actuating the same by steam power” in conjunction with Edward Faux of Yaxley, Hunts and Samuel William Campain of Deeping St Nicholas, Lincs; and on 11th May 1882 for an invention of “Improvements in winding engines for steam ploughing and other uses”. You can see a Thomas Perkins horse trough in the Market Square today close to the Cabbies’ Hut, now used as a planter. It was saved and restored by Hitchin Historical Society – details appear in the HHS publication The Hitchin cabmen’s shelter.

At an agricultural show in around 1869 Thomas met William Barford, who was well established as half of an agricultural equipment firm, Amies and Barford, in Peterborough. Thomas joined the business. The Amies partnership was dissolved in 1872 and the new business became Barford and Perkins in Peterborough, starting an important chapter in that city’s history. At their new Queen Street Iron Works they claimed to have made the “world’s first motorised road roller” in 1904, although in reality one had been made in France the year before. 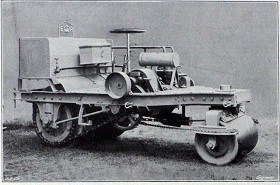 Thomas and Frances had a grandson , Francis Arthur Perkins (Frank), who was born in 1889 in Peterborough. He was educated at Rugby School and Emmanuel College, Cambridge, and ran a farm in Hertfordshire briefly before returning to the family firm of Barford and Perkins in Peterborough. He was remembered as “a tall, erect, well-built man with a ginger moustache, dressed in a tweed suit”, always eccentric, and “always wearing a fresh flower in his lapel”. He joined the army in World War I and rose to the rank of major, while the company in Peterborough manufactured missiles.

In 1920 Barford and Perkins became part of Agricultural and General Engineers (AGE) Ltd. Perkins Engines was founded in June 1932 in Queen Street, Peterborough by Frank Perkins and his friend Charles Wallace Chapman, who was about 5ft 4ins tall, 10 stone and studious, unlike “the larger than life and overbearing Perkins”. It was Chapman who designed the high speed diesel engine. The other partners were George Dodds Perks, a solicitor who had been vice-chairman of Agricultural and General Engineers Ltd (AGE), chairman of Aveling & Porter and secretary to the Light Railway Commission in 1901; and Frank’s brother-in-law Captain Alan J M Richardson, an officer in the North Somerset Yeomanry in World War One: Frank was married to Gwynneth Williams, Richardson to her sister Claudia. The four men decided to explore the untapped possibilities of diesel engines for use in cars and small trucks. Before this, diesel engines had been large, low-revving monsters mainly used for marine, railway and agricultural applications. They fitted their first diesel engine on 4th December 1932 and made engines for cars and trucks, employing seven people. They made the high-speed 4-cylinder Vixen engine and in 1935 their diesel engines broke land speed records at 95 mph. Commer used their engines in their vehicles, and in the 1930s one was fitted into the ‘sea tractor’ which services the island of Burgh in Devon, where at high tide the tractor takes passengers back and forth to the mainland.

During WWII the company made armaments, and in 1945 they opened a new state-of-the-art factory on the outskirts of Peterborough which by 1948 was producing 100 engines per day. Expansion continued and in 1953 it became a publicly-owned company which in the late 1950s made 75,000 engines a year and employed 7,000 workers. They introduced the successful fuel injection pump, but in 1959 Massey Ferguson was able to acquire the company. However, revitalised, they made their one millionth export.

Frank retired in 1962 and died in 1967. Ten years later the company had 20,000 employees, one of whom was our speaker, Stephen Parry, who worked as an accountant at Perkins Engines for thirty years. In 1998 the company was acquired by “Caterpillar”, a US concern, and became an international organisation manufacturing a thousand diesel engines a day and making huge profits in the United States, Brazil, China and India as well as Britain. Nowadays the company mainly makes engines for off-highway vehicles like diggers and tractors, and has a workforce of only 2,200.

Frank Perkins had a motto which is carved above the original main entrance of the sprawling Perkins Engine Company Limited plant in Eastfield, Peterborough: “Where there is no vision the people perish” (Proverbs 29:18). His vision ensured the people prospered.

Additional research by the author: