News of two forthcoming events this time, and one that took place very sucessfully in March for which we have some photos, thanks to Stephen Bradford-Best.

This is an exiting new venture for us. On Saturday 11th July, the Society is hosting Hitchin’s first History Day, at Church House.

Many local groups will be there with stalls, displays and refreshments. Displays will include memorabilia from Three Counties Asylum in Arlesey/Stotfold; Pirton Local History Group who are currently recording the hstory of their listed buildings for their website;a Village of Preston powerpoint display; British Schools Museum; Hertfordshire Archives; Royston & District Local History Society; First Garden City International Exhibition from Letchworth; a display by North Hertfordshire Archaeological Society; Hitchin Society; Hitchin Forum; and others awaiting confirmation.

In addition, there will be half-hourly tours of the Church tower for groups of up to ten people, at £2 per person, between 10.30 and 2.00. There will also be a tour of the body of the Church itself at 10.30, but probably only the one as there is to be a concert in the Church later that day and rehearsals start after that. This will not affect the tower visits.

Refreshments will be provided by the events committee of St Katherine’s Church, Ickleford. There may also be a cake stall. This sounds like a real treat of a day! 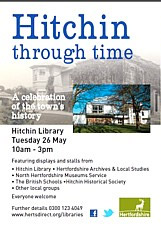 To celebrate the library’s 50th birthday, there is a Hitchin Through Time event at the library on Tuesday 26th May from 10 till 3pm. There will be stalls, displays, leaflets and refreshments. Many local societies and organisations are taking part including this Society, the Museum Service, British Schools Museum, many other Hitchin Societies, and Eric T Moore books. 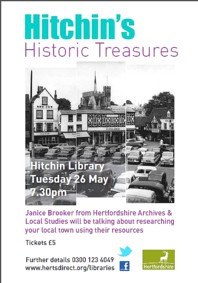 In the evening at 7.30, the library is hosting a talk by Janice Brooker from Hertfordshire Archives on Hitchin’s Historic Treasures, price £5.
Further information is available from Judi Broughton, Hitchin Library Supervisor on 0300 123 4049. 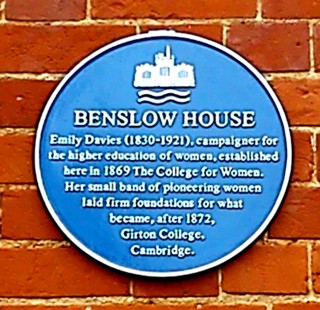 A new Blue Plaque was revealed to the public on 19th March at Benslow Nursing Home, with eloquent speeches by Robert Moore, the present owner of Benslow House; Val Campion, author of the HHS publication Pioneering Women: the Origins of Girton College in Hitchin; and Professor Susan Smith, the current Mistress of Girton College. Benslow House was home to the first women’s college in 1869, which later moved and became Girton College, Cambridge. The co-founder and first Mistress in Hitchin was Emily Davies. 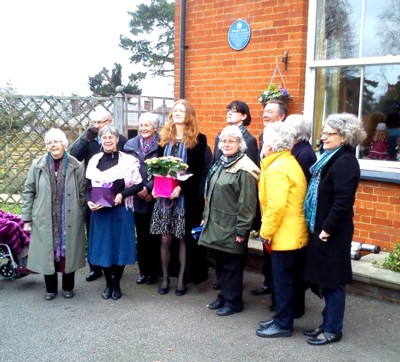 The plaque was jointly produced by our Society and Robert Moore, who owns the Nursing Home at Benslow House.