News this month about the conservation area, a letter from HHS to the District Council about the proposed removal of the museum to the Town Hall, events at Hitchin Festival and an outings report with photos. But we have to start with sad news.

We have to report the death of Dr John Williams. John was the husband of Jean Williams, one of our founder members and for many years an active Committee volunteer. Many members will recall how John supported the Society by organising, with Jean, our Garden Parties in the 1980s and 1990s, and by frequently assisting with refreshments and arrangements at a variety of other Society social events, in particular Christmas Parties over a number of years.

John’s passions included gardening and music, and both these specialisms were often drawn on for Society functions. John had been increasingly unwell for some time so, in the recent past, we have been deprived of his good company. Our condolences go to Jean and the family. John’s efforts on our behalf will be fondly remembered for very many years to come.

The District Council recently engaged consultants (The Conservation Studio from Cirencester) to undertake a review of the Hitchin Conservation Area and the List of Locally Important Buildings. This Local List is designed to include those buildings that are of particular importance to the history and environment of the town which do not qualify for national English Heritage Grade I or II Listing. The last such exercise was undertaken in 1997. Since then there has been increasing concern about the town’s historic environment because of the significant pressure for housing development, especially flats; the recent demolition of Rose Cottage (built c1855) on Walsworth Road raised particular concerns over Hitchin’s Victorian heritage. 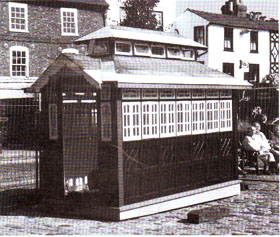 The Cabmen’s Shelter, now restored and standing in Market Place, has been suggested as worthy of being added to the Local List

The consultants have a number of key tasks: to examine the extent and working of the existing Conservation Area; to consider possible changes to its extent; to look at the existing Local List and consider possible additions to it; and to assess the Character Statements that are meant to encapsulate the basic urban characteristics of all the areas of the town. In all these areas the Society has been involved in providing the consultants with background material and suggestions for how conservation policy might be changed for the future.

The consultants have recently provided the District Council’s Conservation Team with draft proposals. The next stage is to hold a Consultation Exercise on these proposals. This involved the launch of the Conservation Area consultation on 4 July at Church House accompanied by an exhibition. This exhibition will be open to the public as follows:

Visitors will be able to offer comments, either on questionnaire sheets or separately; council officials will be in attendance at the exhibition at the following times:

Once all the views have been submitted final decisions will be made on any changes. These will then be adopted by the Council as an updated conservation policy for Hitchin. Please take time to visit the exhibition and make your views known. If you want to feed in comments via the Society please get in touch with either Scilla Douglas or David Howlett.

The Society has helped mount a number of events for this year’s Hitchin Festival:

This is the text of a letter sent by our chairman on behalf of Hitchin Historical Society to North Herts District Council on 10th June 2009 regarding Museums Policy and the New Town Hall. It was addressed to

Hitchin Historical Society has followed closely the issue of the council’s museums policy since discussions began almost four years ago. Our Society is very concerned indeed about the current evolution of that policy. We still cannot fully endorse the Arts, Museums and Heritage Strategy. We are, at present, being asked to give up an existing facility, albeit imperfect, with no clear idea of what will be put in its place. Nor do we consider that our Society has been involved in a meaningful way in developing the Strategy despite the relevance of our considerable expertise.

Our Society has worked in various ways with Hitchin Museum over more than thirty years. We value very highly the service provided by its staff, often in very difficult circumstances. We have, at times, given significant practical and financial help towards its operations such as funding for the Tony Foster Study Room and input for the Great Northern Railway 150 exhibition and events. Our substantial publications programme – for example about 25 major books and numerous smaller outputs over the past twenty years – almost invariably draws on the Museum’s resources and brings wider attention to its value in both popular and academic spheres. Museum support has aided our Society in its efforts to draw attention to the wider relevance of Hitchin’s history to the town’s current identity, profile and prosperity: for example published town walks, contributions to Hitchin Initiative publications, Hitchin Blue Plaques, other ad hoc plaques, the restored Cabmen’s Shelter in Market Place, the removal to the Museum-Library complex of the Sainsbury Town History Mural, the Hitchin Iron Troughs in Market Place, and regular inputs to council street-naming policy.

Given that Cabinet has now decided to proceed with a more detailed Feasibility Study on the possible use of Hitchin’s New Town Hall as a museum facility, we trust that account can be taken of the following points:

A recent book reviewer noted that “Hitchin has been well served by its local historians”. We do not want to see comment that Hitchin has been badly served by the council’s museum policy. We are committed to help get it right – so please involve us, ask us and listen.

Our regular return visit to Wymondley Priory this year took place on a glorious sunny evening on Tuesday 23rd June.

Our host and owner, John Hope, took us on a guided tour of the barn, the delightful grounds and the ground floor of the house. The priory, of the Augustinian order, was believed to have been founded in 1203. However in 1538, following the dissolution of the monasteries, the land and buildings were leased by James Needham, official carpenter and subsequently surveyor to King Henry VIII. It was Needham who built the impressive barn in 1541, 100 feet by 40 feet, using local oak as well as some timbers from an earlier barn built by the monks in 1370. 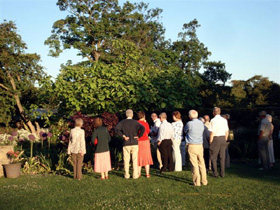 He built the current house around the nave of the priory church and there are carved stone arches inside. The house and barn are surrounded by a moat, still filled with water on two sides, with the outline of a medieval village in a field beyond.

This is a truly magical location and the extensive immaculate gardens create a tranquil setting for the beautiful old buildings. I can quite understand why it is such a popular venue for weddings and other events

We have now finished our meetings until the autumn. Our next meeting is on Thursday 24th September. Unfortunately Tim Dye will be unable to give the scheduled talk on High Down House so a new speaker and subject are being arranged for that evening. Details will follow. The meeting starts, as usual, at 8pm at Church House and is followed by refreshments.