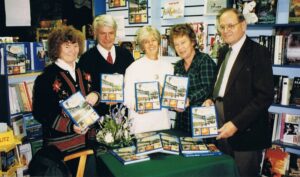 We were very sorry indeed to learn that Laurie Hughes died, after a short illness, on 6th May aged 90.

Laurie was a stalwart supporter of the Society for over forty years. He was born in 1930 in Erdington in Birmingham and then followed a long career in the Royal Air Force serving at home and abroad in Egypt, Libya, Hong Kong and the Gulf. Laurie ended his service career with a posting to RAF Henlow. In 1974 he moved to Westbury Close in Hitchin where he and his wife Dorothy, who passed away two years ago, spent the rest of their lives.

Laurie was very interested in ‘things historical’ from an early age and, once based here working for the Institute of Electrical Engineers as a second career, he took up the study of Hitchin’s past and became an early member of the Hitchin Historical Society. For many years he filled a number of key Committee jobs including Programme Secretary, Secretary and Treasurer. His attention to detail was legendary and he worked long and hard, usually behind the scenes, on a wide range of activities to make the Society a success. His wife Dorothy was also a key part of the team and her contribution to the production of publications and catering and organisation for social events was absolutely vital.

Over the years Laurie amassed a large collection of material on Hitchin history and some key components of this – such as his famous scrapbooks – were deposited with our local Museum. Laurie was always a pleasure to work with and enlivened Committee Meetings with his dry and apposite sense of humour, his gift of pragmatic solutions for practical problems and his reputation for crisp and prudent financial management. He was utterly dependable and what he said he would do was always done – and with time to spare. Although Laurie had been less involved in the day-to-day activities of the Society in recent years he continued his interest in what we were doing and was still one of our regular Newsletter and Hitchin Journal distributors, including our last regular deliveries in October and January.

Laurie was also generous with his time and efforts for the British Schools Museum in Hitchin and for the Hertfordshire Record Society and made valuable contributions to the working of both organisations.

I was grateful to represent the Society at Laurie’s funeral on 29th May; it is planned to have a memorial service later once conditions have returned ‘nearer to normal’. We have sent our condolences to his son Stephen and daughters Susan and Alison. We underlined how Laurie will be very much missed and also how many of his contributions to the Society still continue in legacies which still benefit us today.