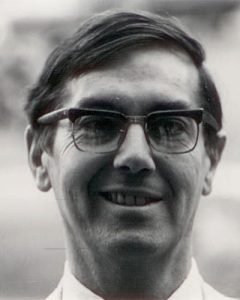 Leslie became secretary of HHS in 2010 and always handled the Society’s correspondence in the most polite way, with precision and occasional humour. He had indicated his intention to stand down at the 2018 AGM in order, he said, to devote more time to his other activities (of which there were many), but alas, death intervened. He died in hospital on 19th December 2017. Our Chairman, Terry Knight, has written this for us:

“Leslie was born in Hitchin in 1941 and attended St. Saviour’s School and Hitchin Boys’ Grammar School. He held degrees from Birmingham, Essex and Loughborough Universities and lectured on mathematics at the latter seat of learning from 1969 – 2009 when he retired to his home town. He taught pupils at his former school on an occasional one-to-one basis and held various voluntary positions at St. Mary’s Church where he worshipped. He also carried out committee work for the Institute of Mathematics and its Applications (IMA), acted as a mathematics advisor to the OCR examination board and was a Freeman of the Worshipful Company of Educators. In addition, Leslie was for six years Chairman of the Mathematics group of the European Society for the Education of Engineers and for a similar length of time was Honorary Secretary of the IMA. Furthermore, he served on the Steering Group of Hitchin Forum and was on the Executive Committee of Hitchin Society.

Leslie, who was not married, lived on Symonds Road and often visited me at my home on Swinburne Avenue to discuss committee matters. He was always smartly dressed, extremely polite, very efficient and an excellent raconteur, frequently witty and always good company. I, in common with so many other people, will miss him greatly.”

I would add that the Leslie Mustoe Prize of £100 is awarded annually by Loughborough University to the student on the Science and Engineering Foundation Studies (SEFS) programme with the highest overall pass mark. 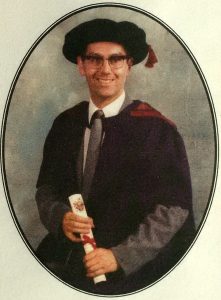 Leslie’s funeral was very well-attended, upwards of 200 people crowded into St Mary’s Church and many had come from far afield. Four priests attended, including Rev Oliver Learmont, formerly assistant Curate at Hitchin, and Canon Michael Roden, the Vicar of St Mary’s, who led the service. There were tributes from his friends Peter Hollingsworth and Jackie Lansdown of Hitchin Boys’ School, Richard Stokes from his Loughborough University days, his local friend and District Councillor Judi Billing, and Sheila Johnson, a childhood friend who flew in from Canada.  There is an excellent obituary relating to Leslie’s days at Loughborough University here

with wonderful asides which capture his personality and humour.

‘Dr Leslie Mustoe’ also presented a special ‘television lecture’ entitled Heads I win Tails you lose, now available on YouTube.  It was based on the 1992 London Mathematical Society Popular Lectures and if you find probability intriguing and challenging, you’ll really enjoy it. It’s not for the faint-hearted though, despite Leslie’s occasional amusing dry comment. You can see it here:

Heads I win Tails you Lose

It’s also lovely to see and hear Leslie again –  his enviable youthful looks belied his age, as ever.

Until the funeral, few of us knew of Leslie’s love of Elgar’s music. Land of Hope and Glory resounded through the church, and the choir sang the motet  Ave Verum Corpus. Finally we heard Chanson de Matin.  Leslie was also patriotic, represented by the hymn  I vow to thee my country  to Holst’s Jupiter music from his Planets suite.

There was a collection in the Church in loving memory of Leslie, the proceeds to be divided between St Mary’s Church and Hitchin Boys’ School as he requested. His burial took place at St John’s Road Cemetery, Hitchin.

Leslie will be greatly missed by a large number of people from all generations, and we send our condolences to all of you. We at the Historical Society will miss his quiet but attentively critical attendance at our committee meetings, his very-much-to-the-point, not to say terse (though never humourless) emails, and his genuine, gentlemanly politeness and thoughtfulness at all times.